Users of Windows 10 ocassionally encounter errors when updating their operating system. One of the more common errors is (0x8024a105) which prevents them from continuing the system update. The error will display the following message:

There were problems downloading some updates, but we’ll try again later. If you keep seeing this, try searching the web or contacting support for help. This error code might help:  (0x8024a105).

If you encounter an error like this when updating your Windows 10, you don’t need to worry as it can be easy to fix. There are many different ways to resolve the issue. But before that, let’s first know what (0x8024a105) is.

As you can see below- lots of people in the Microsoft Answers community report problems with this error:

The (0x8024a105) is an error code that is used by Windows to warn programmers and computer users when there is a malfunction. This is just one of the many codes that are installed in a computer system unit. Just like any other errors, there are a variety of ways to fix this issue.

Below are the different fixes that can be done once you encounter (0x8024a105) error in your computer.

The easiest fix is to reboot your computer. There are a lot of times where rebooting your computer can fix any related error. Another easy way is to change your internet connection. You can swap your wireless connection to a wired one or vice versa. This will also fix any Windows error aside from rebooting.

Another way is to change the User Account Control (UAC) Settings. Sometimes, the error occurs when there is an issue in the UAC, specifically when the logged-in account does not have any permission. You can resolve the issue by changing the UAC settings permissions following the steps below:

Video Guide: How to Turn Off On or Changing UAC (User Account Control) Settings

4th Fix: Use the DISM Tool

The presence of corrupted files is one of the causes of the (0x8024a105) error. Running a DISM tool is one way to fix the problem. Here is how you can do it:

ALSO READ:  6 Fixes For “There Was An Error Connecting To The Apple ID Server” Error

5th Fix: Do a Clean Boot

Another alternative to fix the error is to perform a clean boot on your Windows 10 computer. To do this, follow the procedures below:

A (0x8024a105) error will also appear in your Windows 10 update when your Windows Update components are corrupted. By resetting these components, it will resolve the issue. Here’s how to do it:

Note: The commands above will stop all the services needed to download and install updates.

Note: These two commands will rename the Softwaredistribution and Catroot2 folder, the folders that are being used by the Windows Update in storing data and temporary files. Once they are renamed, the system will detect that the folders are missing and will, therefore, create new ones. Once there are new folders, the Windows Update can now avoid the issues of the old folders thus resolving the error.

A person complained that he couldn’t update his Window 10 because he was getting an error code 0x8024a105. 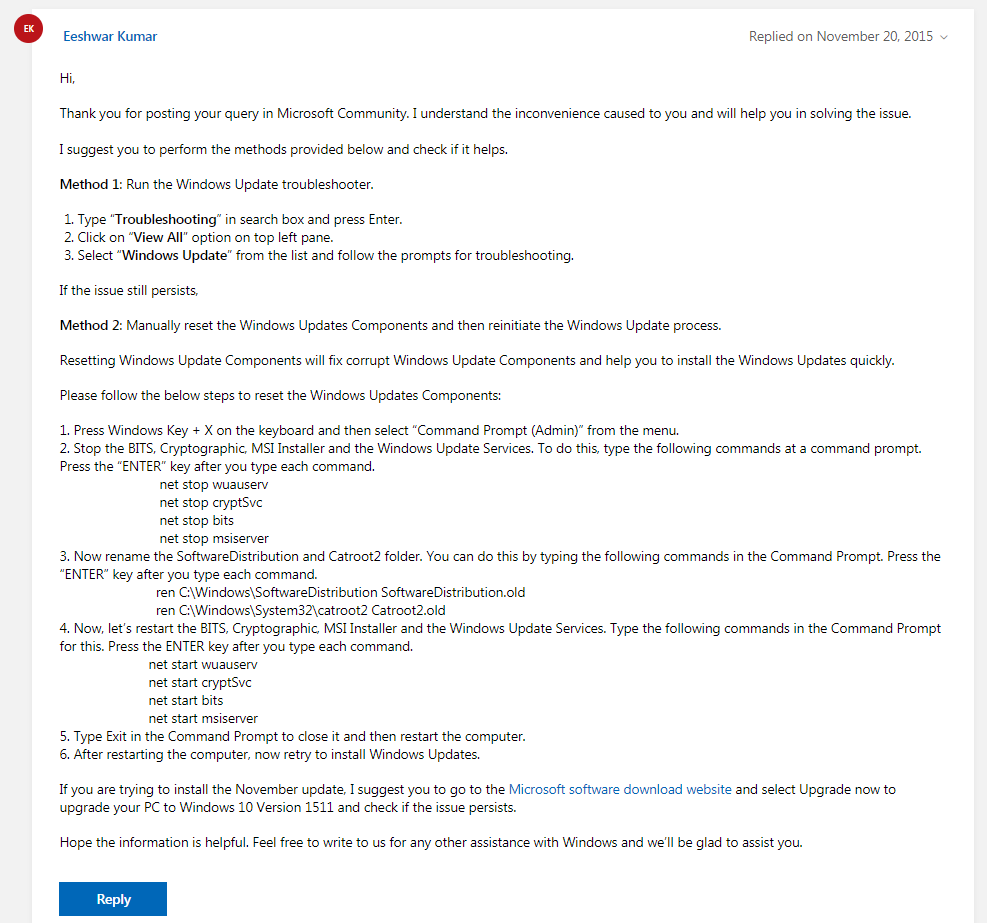 Another computer expert said that you could try to manually reset Windows Update Components and then restart the Windows Update process. However, he mentioned that the steps might be difficult for someone who wasn’t computer savvy.

An individual said that he had the same issues with Windows 10 and the 0x8024a105 error code. He tried to reset the Windows Update Components by following the provided instruction by Microsoft support.

Another computer owner complained that he was getting the 0x8024a105 error code every time his device tried to update and that he was looking for possible solutions. Microsoft support explained that the error could be caused by many different factors, including corrupted files or missing system files. They recommended that he should run Windows Troubleshooter to try and identify the problem. However, the computer user stated that the thing that fixed the 0x8024a105 error code was updating his BIOS.

A user commented that he had problems with the KB4088776 and that he continued to get the 0x8024a105 error code. He tried several solutions provided by other forum members, but he wasn’t successful. When he contacted support, they said that he should try to reset Windows update by running a specific script as an administrator. They also said that he could try to install the update manually.

Another computer expert reported that KB4088776 turned out to be a problematic update for Windows 10 users. He said that he opted to hide the update and wait for Microsoft to come up with a resolution to the issue. The poster also said that there was no need to reinstall Windows 10 because it was a rash decision.

A person suggested that you disconnect from the Internet and restart the device before you try to install the Windows 10 updates. He mentions that the 0x8024a105 error code might appear because some of the files which had to be updated were still in use and that could prevent the update from happening. He said that you might have to restart several times until Windows managed to install all the updates successfully.

A forum member mentioned that the update might fail if there was not enough space on the device to finish the update. He said that you should check your disc space before you do anything else. The computer user also stated that Microsoft should work on making things easier when it comes to resolving update issues.

Several others Windows 10 user complained that they had similar problems with the Fall Creator update and that they attempted the update several times. It was annoying because the update took a long time and turned out to unsuccessful every time. They did a Google search and looked for answers on the Microsoft forums. However, the only solution they were offered was to install the update manually by following the provided link from Microsoft.

If you are experiencing the (0x8024a105) error when performing a Windows Update, you can easily fix it by following the said solutions. If none of the fixes shown above work, it is better to reinstall a fresh copy of Windows 10. Just make sure to back up all the essential files to avoid inconvenience in the future.