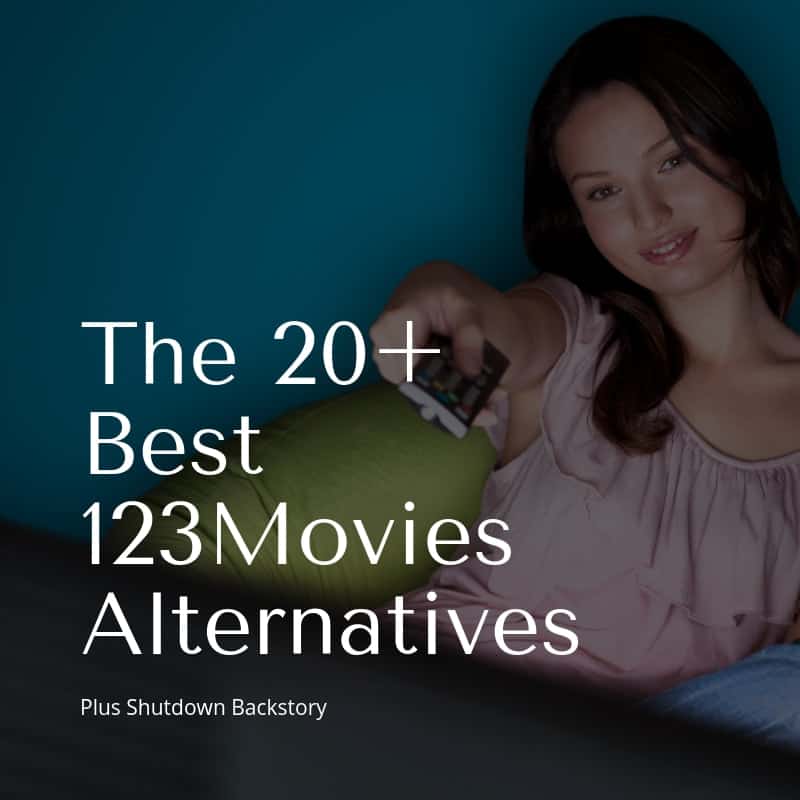 In this post, we cover the backstory of 123movies disappearance and provide over 20 alternatives if you’re looking for a new streaming site.

123movies was a huge, free streaming site. Before being shut down in March 2018, according to some sites including Reddit, it went under a variety of domain names, apparently, including:

According to a farewell message posted on the now-defunct site, “We’ve been providing links to movies and shows for years. Now it’s time to say goodbye. Thank you for being our friends and thanks for staying with us that long.” TorrentFreak managed to capture some screengrabs of their farewell message and provide some backstory to the shutdown. 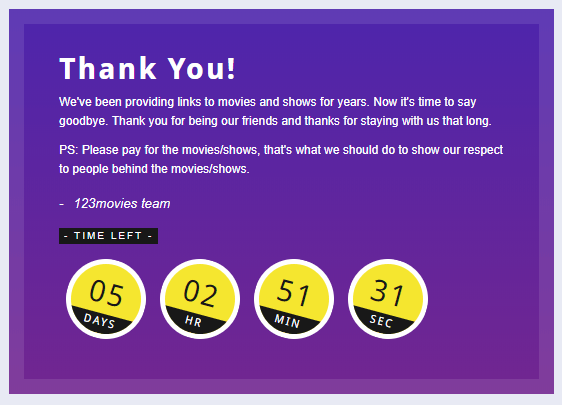 Apparently, the MPAA (Motion Picture Association of America) had labeled the site as the most popular illegal site in the world (Source). They seemed to have been facing increased hostility from government and movie industry entities and decided to close down rather than risk legal repercussions.

One Reddit user over in r/Piracy described the situation this way:

According to the AceThinker website, a new version of the site has cropped up called 123movies.la. We’re not entirely sure this is the same as the original- but it’s worth checking out. In our experience, it’s sort of like whack-a-mole:

The site appears, gains popularity, gets taken down, reappears, gets popular and is taken out again. Each time it reappears it can take on a slightly different name- that’s what makes it somewhat confusing whether 123 Movies is still around or not.

Plus, a lot of new sites appear using the 123Movies phrase in their domain name to capitalize on the huge amount of search traffic for the term. Plus they’re able to convince people Googling for the 123Movies site that they’re the same site just under a slightly different name.

For example, there are a bunch of sites ranking for 123movies who use that phrase in the domain name:

In all, it’s pretty confusing. So if you’re looking for some alternatives to this possibly defunct streaming site, we’ve compiled a list below.

Disclaimer: As of this writing, in 2019, these links below all work.

However, over time, these links might break, or the domains might switch ownership, so make sure you have an ad blocker extension working before you visit them. We’ve seen some of the bigger streaming sites get removed- and then they pivot to a new top level domain.

For example, switching from a .com to a .li. So you can always try using Google, and even Bing, which seems less likely to deindex these sites, to find the new URL, by searching for the site name:

CouchTuner is a great option. The way it works, you can search out your favorite show and generally you’ll find an episode list. Choose the episode you want to watch and you’ll land on a page like this for Breaking Bad where you’ll have the option to begin streaming from different sources. 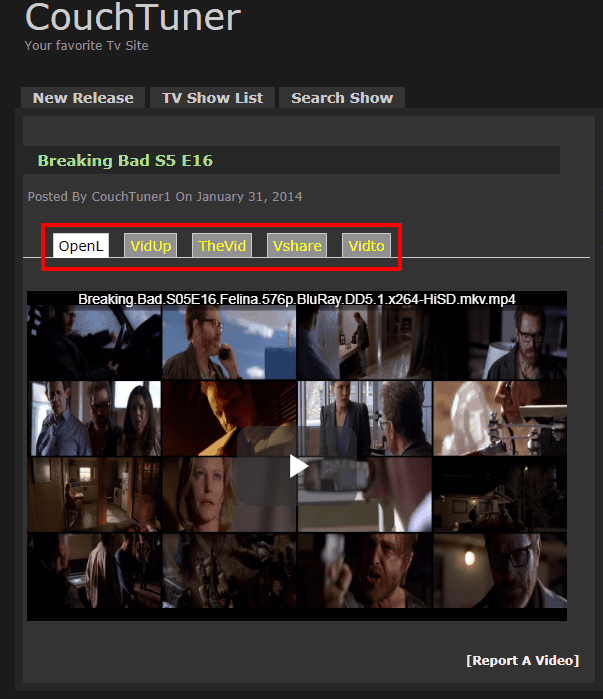 We’ve used Couchtuner with and without an adblocker in Chrome. Sometimes it works better without one enabled. That said, you’ll get a lot of annoying ads. But that’s frequently the cost of using a free streaming movie site. CouchTuner is definitely one of our top recommendations. They have tons of movies and series. And because they don’t actually host the video content, merely link out to it, though it plays on media players on their site, the site doesn’t seem to go down.

Another good option is Shush.se. Their tagline is “Watch TV Shows and Documentaries Online for free in high definition.”

As you can see below, they have a ton of popular shows including:

There’s a lot more. We like it because it’s a really stable option. The site has been around for a number of years. When it comes to TV shows, they’ll have all the episodes, with multiple streaming sources, and an easy way to report broken feeds. This is important because once a stream is broken, and an episode or movie isn’t available, users can easily report the issue to site moderators and get it fixed.

One of our go-to resources is Reddit. Specifically the BestOfStreamingVideo subreddit. Inside of the subreddit you can see a ton of links to websites where you can watch recent movies and series. Since these sites often are deindexed or otherwise removed from the internet, this subreddit provides a current resource of the best streaming sites. To use it, try searching the subreddit for the show or movie you’re trying to watch. Or, you can try visiting some of the 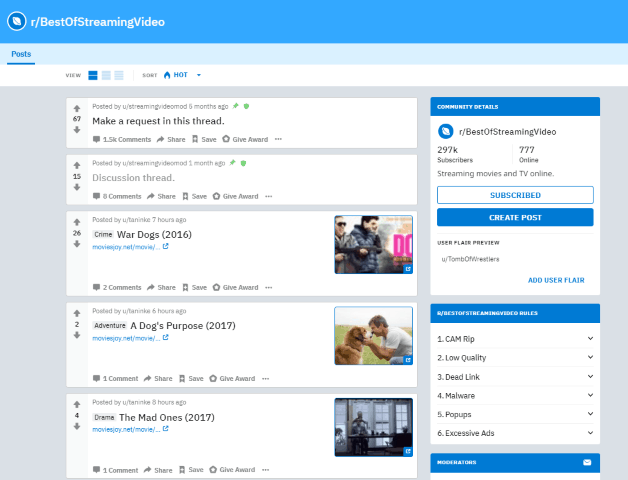 Another option that we’ve found by scouring the BestOfStreamingVideo subreddit is Azmovie.to. If you sort the subreddit by Top of all time, you’ll see that a bunch of the threads point to AZmovies, which apparently goes under a bunch of different names:

As you can see below, the screenshot below showcases some incredibly popular movies from categories including Comedy, Crime, Drama, Family, Fantasy, History, Horror, Mystery, Romance, Sci-Fi Thriller, and War.

In addition, they’re displaying some pretty fun movies- many of them really new (at least at the time of this writing):

We search for 123movies when we think about watching movies on the internet free of charge. We have however been scouring the internet, lost, in search of the next best alternative, since the website’s abrupt closure back at the start of 2018. Making things easier for you is my aim in this article.

The three best 123movies alternatives for you will be provided in this article. To ensure that you can watch your favorite movie in the comfort of your home, whenever you want to, bookmark them. To use them, you will not be required to register a credit card or enter any related details, nor will you be asked to pay any charges as these sites are absolutely free; this is probably the best thing about them. We hope that you agree with the list of sites we consider as the best in this regard.

People considered 123Movies as a place they could watch, for free, movies anytime. This was a highly popular, across the world, but illegal pirate website. When people wanted to watch movies this was their preferred go to website.

Also popularly known as 123MoviesHub and GoMovies, 123movies was shutdown in March 2018. This meant that fans of the website could no longer access it. Most of the people who preferred 123movies as their sole source of entertainment found this shocking. Piracy was identified as the main reason for the shutdown. The website discontinued its operations as users were urged to go to movie theaters and contribute towards payment of those who strive to create said movies.

Each month, visitor numbers on the site were close to 98 million users. In the whole world, it ranked as the top piracy website. As it stands, others are aiming for the same key word, you can imagine why.

Previous users of the site continue to search for 123movies with the hope that it comes back, simply because they are so used to it, even though the original site shutdown. Others, who were interested in making an entry into the movie streaming industry, meanwhile, took advantage of the website’s established success.

They can gain from the website’s existing following, by using the keyword and ranking high nonetheless. However, it is still to be seen whether these websites are here to stay. All piracy websites, across the world, face the risk of closure with today’s sweeping wave of anti-piracy.

These free streaming sites are definitely in a gray/black legal area. The fundamental conundrum, especially if you own the site, is that once it gets really popular, you’ll probably become a target of copyright claims. There’s also an ethical component here.

Companies and creators have invested a lot of energy and money into creating this content. By circumventing payment, viewers are essentially hurting themselves- they are depriving their favorite movie and television-series creators of the money they need as an incentive to keep producing quality work.

The other strange side of it is that many of these third-party website operators who host and stream content illegally are actually making money off of the content. All of those annoying and invasive ads that basically require an AdBlock installation are generating ad revenue for the website owner.

Should It All Be Free?

Many people believe that everything should be free. But if everything were ‘free’ there would be no incentive for artists and companies to create content if they can’t profit from their hard work. Plus, besides not profiting, they wouldn’t even be able to fund a TV show or movie shoot. As much as ‘profit’ has been derided and impugned, especially in America, it’s a fundamental component of the incentive structure that motivates anyone to do anything.

Be it work as an actor, study famous film directors, or learn how to build a set. Streaming sites rob creators and reward ‘internet pirates’ who have the tech-savvy to build up streaming sites with insane traffic figures.

At the end of the day, it looks like the whack-a-mole war between movie piracy sites and their institutional and even independent opponents will continue to be waged.