Is PC giving you constant error messages every time you try to log in? To be more specific, are you getting ACMON.exe error messages?

If you experience this, don’t freak out and sell your computer yet.

The problem is probably caused by an obsolete version of the ACMON.exe file, which slows down your computer.

This article will briefly guide you on how you can fix the ACMON.exe error. But first, let us get an insight into what is an ACMON.exe.

ACMON.exe, also known as ACMON, is a software component of the ASUS Splendid Video developed by ASUSTek Computer Inc or simply ATK. 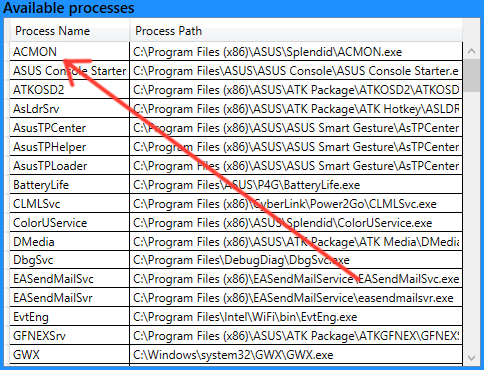 The file name ACMON.exe is the executable component of the ASUS’ Splendid Video Enhancement Technology that is used to run the ASUS Splendid Video.

It basically changes or controls gamma and the color tones of the computer’s screen.

The executable file, ACMON.exe, is susceptible to malware and may cause problems for your computer. ACMON is common in ASUS PCs.

Many .exe errors are presented using dialogue boxes. ACMON errors are caused by one or a combination of the following:

There are both simple and complex ways to solve the ACMON.exe error. Some work well the first time while others need to be combined with other solution methods to work.

Restarting your computer is simple, but it solves a lot of computer problems. Try to Restart your computer and see if the problem is resolved.

According to ASUS Support, another simple solution is to uninstall the ASUS splendid utility and reboot the program. If you still need the program, download it from Asus website and install it again.

You can clean up the registry either manually or by using a third party repair tool. It is highly recommended to use a third-party repair tool to avoid unintentionally messing up your registry.

To repair the windows registry, follow the steps below:

This is a great utility in windows that helps to remove junk files that are no longer useful for your computer. Disk clean up might fix the ACMON.exe error.

To run a disk clean up, follow the steps below:

Faulty or damaged computer drivers can also cause an ACMON.exe error. Update all of your computer‘s drivers and make sure that they are compatible with your hardware devices and the operating systems.

It is important that you back up your data and any other important things on your computer before reinstallation of the Windows system.

ALSO READ:  What Is The Teredo Tunneling Pseudo-Interface [SOLVED]

How To Reinstall Windows 10 Without Losing Data

Reinstalling your Windows system erases all the information, data, and software in your computer including the ACMON.exe error. The process is time-consuming but effective.

ACMON Error slows down computers and makes it frustrating to use the computer. Follow the abovementioned solutions to fix ACMON error, and your computer will be back to normal functioning.

Over at File.net, they identified the ASUS Color Monitor as a product of ASUS Splendid Video by ATK (ASUSTeK Computer Inc.)

They say that ACMON.exe is generally located in a subfolder of “C:\Program Files” with the most common file size on Windows 10/8/7/XP being 684,544 bytes.

One user said that it came pre-installed on his Asus laptop. One issue that he has with it is that it will occasionally require a force shutdown when he is powering off his computer because it fails to automatically close during the shutdown process.

The user experimented with deactivating it through Task Manager and conducting regular video streaming and broadcasting- they all seem to work fine even though it is inactive. Another user had identified it as slowing down his computer.

Since everything was running so slow, he decided to review all of the startup programs that are booting up automatically when his system starts.

Once he deactivated ACMon, he found that his hard drive stopped spinning so furiously and his internet browsing on both Firefox and Chrome browsers was much faster and more responsive.

Another user complained that what it basically does is add on an extra layer of screen processing before the image is rendered on to your monitor.

He says that it will enhance the appearance of your display, but if you want your computer to run a little bit faster you can disable it and sacrifice this visual enhancement software.

Another computer user noted that in his experience it has impaired the performance of word, Chrome, Excel, and Outlook, causing them to freeze up. Whenever he manually shut it down, everything seems to work fine again, though he can’t find a way to uninstall it.

Another user noted that on his system it’s a component of SigmaTel Audio Assistant by SigmaTel and part of SigmaTel Multimedia.

Another user speculated that it is responsible for video optimization and enhancement, saying that in his opinion it this Splendid Video Enhancement Technology is part of an integrated Asus software bundle.

For his particular set up, using a laptop that has a tablet functionality running Windows 10, wildest program runs in the background it hogs a ton of memory.

Should I Block It

Over on Should I Block It, a user said that this video enhancement technology is designed to enhance media to decrease noise as well as enhance conversion rates to create more vivid imagery and higher contrast.

Over on Reddit, in the Windows Forum, one user was having an issue where I pop-up was appearing every time he restarted his operating system that said:

A fix was provided by a user who recommended running CCleaner to eliminate registry errors and temporary files, reboot the computer, and then reinstall the Splendid software.