If you happen to experience losing your internet connection while in the middle of browsing trending cat videos and you can’t seem to reconnect, there may be a chance that there is a problem with your PC’s alg.exe.

Alg.exe stands for Application Layer Gateway Service which is an executable file that is not always immediately visible but still a reliable file from Microsoft.

This software is the one responsible for using ports secure a link from the internet or a LAN.

Despite the problems which are probably linked to alg.exe, this is not a virus. For a safe internet connection, this software may sometimes work with ad blocker—another executable file.

Because most executable files are everywhere, they are sometimes used as a means of delivery for a malware infection or a virus.

Alg.exe is one of the core process and components of Microsoft Windows. While Microsoft Windows serves as the operating system, the Application Level Gateway is the window process files that allow Internet Connection Sharing and third-party plug-ins. 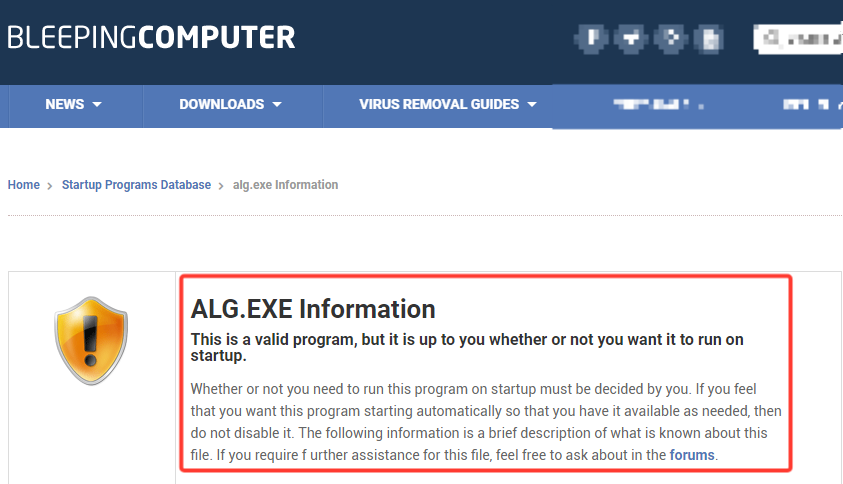 Alg.exe was produced to give support to a specific third party plug-in that authorizes access to network protocols through the Internet Connection Sharing features and Windows Firewall.

The plug-ins that are supported by the device is capable of opening ports and altering data that are accessible in packets such as the IP address and ports. Furthermore, alg.exe is created to assist an active file transfer sessions via the Network address translation engine made by Windows.

The true alg.exe is not a virus. However, creators of malware programs like worms, Trojans, and viruses give the same file name to their process to deliberately avoid detection. Alg.exe file that is not located in C:\Windows\System32 will have the following security rating:

How To Fix alg.exe Errors

Since the alg.exe is part of Microsoft Windows, the first fix is to check the authenticity of the alg.exe file currently present in your computer.

Remember that the alg.exe file is located on the C:\Windows\System32, otherwise the file is suspicious. Here are the steps to do the search:

After doing this and you find out that there is numerous alg.exe file on your computer, check where they are located and eventually remove the files that are not in the correct location for an alg.exe file.

You can also fix problems associated with alg.exe by cleaning out your computer with an anti-spyware. File.net suggests that you use Security Task Manager to verify its security.

Alg.exe is not dangerous if it is authentic. If the alg.exe file on your computer is spyware or a virus, you can always remove it just by downloading trustworthy anti-spyware.

However, you can fully avoid having an encounter with any errors by running a full system scan on your computer regularly to keep it away from being infected with viruses and others.

Also, you have to make sure that the Anti-spyware and Anti-virus of your device are always up-to-date.

Microsoft continually updates their system files to improve them.

If those associated with alg.exe are not updated, you might experience some problems. Errorboss suggests that you check Windows Updates on Windows 7, 8, 10, XP, and Vista, follow the steps below:

We browsed a bunch of different forums researching some common issues related to alg.exe (the Application Layer Gateway Service), including exploits, its files missing, listening concerns, privilege escalation, and generally what the process is and why is it running.

Over on Neuber, One person had some trouble with it, complaining that an error occurs when this process is running whenever he tries to close Windows Explorer or shut down Internet Explorer.

However, one person claimed that it is a known Trojan and spyware virus that is capable of reconfiguring your registry – this was posted by a virus Tech.

A Windows XP user says that if you initiate the native personal firewall, this process will begin running.

Another person suspected that it is behind some internet connection difficulties he was experiencing.

Historically, he’s always deactivated it from within task manager, but after discovering that it is a Windows internal process, he is less suspicious of it. On the other hand, he says that it could potentially be that this particular .exe file is prone to hacks and infections.

Another computer user said that this is not a dangerous file process. He says that if you are using a third-party firewall and you aren’t doing any shared networking, it is safe to disable. On the other hand, if you are sharing your personal computer resources, it’s likely that you rely on this process.

A certified networking professional said that the service can easily be disabled in the Services MMC Without disrupting your internet connection.

Another user said that if you aren’t playing around with a Windows run firewall, or using the Multilingual User Interface, you can easily deactivate the entire service package under: “controlpanel/admistrative tools/services”windowsfirewall/ICS”.

On the other hand, if you are employing the native Windows Firewall technology or using your personal computer as an internet gateway for other computers, you’ll want to leave it on. However, he says that it could potentially get corrupted- though he hasn’t seen this occur.

Another person said that in his experience malware authors have used this file’s name before to cloak their malicious actions. He says that he used firewall logs to track back two other computer operating systems with non-system32 directories alg.exe’s running.

Though alg.exe is a safe file, the virus or malware with the same file name can be a threat to your PC.

When the files are unexpectedly become corrupted, there is a chance that some malicious files are disguised as one of the secured and known system files.

When this thing occurs, detecting and removing the suspicious file may prove to be a difficult task. It’s best that you perform the abovementioned fixes when you encounter a problem.

ALSO READ:  4 Fixes For the "typeerror 'list' object is not callable" Python error