When you see audiodg.exe (Windows Audio Device Graph Isolation) in Task Manager draining your resources, don’t be too alarmed.

Also, don’t delete it just yet.

While this is not normal, the likelihood that it is a virus or malware infection is low, and there is a fair chance you can easily fix it.

We will walk you through the process of fixing audiodg.exe-related problem. Rest assured that this can be resolved even by those who are not tech-savvy.

Let’s don the hat of a tech geek for a moment and have fun getting to know audiodg and its possible fixes.

The genuine audiodg.exe file – one that isn’t malware or virus disguising itself with the same file name – is a legitimate component of the Windows operating system. It stands for Windows Audio Device Graph Isolation.

This executable file serves as the audio engine of your Windows operating system – Vista, 7, 8, 9, or 10 – which, ultimately, is useful for playing sound or apply audio enhancements and effects on your computer.

(According to Neuber, the majority of computer users say it’s safe:) 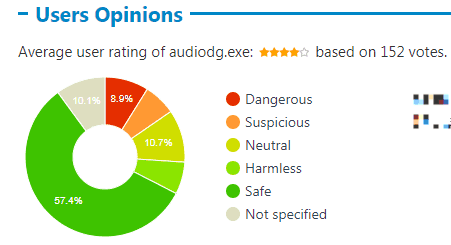 It is an isolated service from the Windows Audio Service so that third-party audio apps vendors can run their own audio enhancement service on your PC without destabilizing the Windows Audio or worse, crash the whole system. This process is called digital signal processing, and the audio graph (audiodg.exe) handles it.

The audio device graph isolation file should be located in this address: C:\Windows\System32. Otherwise, it poses a danger to your computer.

To ensure that the audiodg file in your computer is a genuine one, make sure you run a malware and virus scan. For more information on checking suspicious variants of this file, please refer to this section on Viruses with the same file name.

Video Guide: What is audiodg and why is it causing high CPU usage?

Why is it that the audiodg.exe in Windows 10, or any of the older operating systems, hogging your CPU system resources?

This is often caused by poorly written audio enhancement drivers that tend to consume your CPU and memory or even thrash your hard drive.

That said, the easy fixes listed below revolve around this fact. And because it is an isolated process, the fixes are easy to work out so you can reconcile audiodg.exe errors.

This first method aims to disable the audio CPU enhancements that are processed by audiodg.

This is one of the top solutions suggested at the Microsoft Windows community forum. Here’s what you can do:

Video Guide: How To Disable Audio Enhancements On Windows 10

Some users found that the audiodg exe CPU problem is related to the audio sample rate. Measured in hertz (Hz) or kilohertz (kHz), the sample rate is the number of audio samples carried per second.

A Microsoft Windows agent offers the following method to adjust the audio sample rate for Windows Vista, 7, 8, 8.1, and 10:

ALSO READ:  What is jucheck? | Plus 4 Fixes For This Oracle Service

It is also possible that the audiodg exe problem came with the automatic volume adjustment in newer versions of the Windows operating system. These include Windows 8, 8.1, and 10. To resolve this, you can refer to this solution by techrevue.

System problems caused by audiodg may be caused by an outdated audio driver. To resolve this, the Microsoft Support community suggests checking the Device Manager.

If this didn’t work to fix the audiodg.exe issue, update the generic audio driver that came with Windows.

Over on Neuber.com, one user experimented with terminating it and found that audio was completely removed from his computer and speakers. In addition, he had some difficulty reinitiating it after he had terminated it- so he recommends not removing it.

Another user who was running Vista says that it is totally harmless and is an isolated sound system for the CPU operating system.

Another user, however, was incredibly irritated by it, saying that it was potentially infected on his system. He says that it caused audio to begin randomly playing on his computer and it really startled him.

Another computer owner documents that a strange occurrence- they say that they noticed it using up 25% of their CPU. 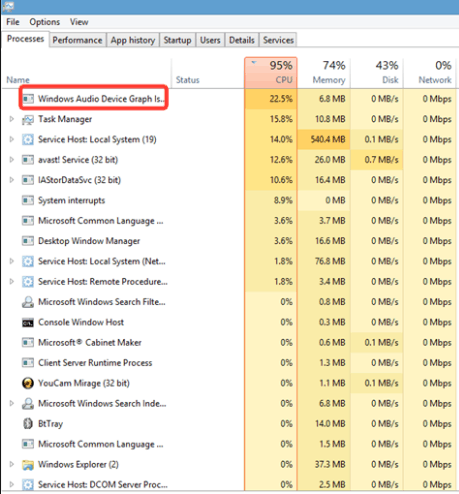 When he ended the process and try to play a video on the internet, the sound worked fine and the file process resumed its normal functioning- which to him indicated it might be a potential virus.

However, another forum user commented that after a lot of research he says that on Windows 7 and Vista it is designed to run USB audio devices. He says that it can be troublesome if you are working with a slow processor and trying to watch a movie online, for example, that has a lot of sound channels.

This can result in drastic CPU usage- he suggests that Microsoft enhance its performance or otherwise codes it better so that this issue doesn’t arise.

Another person documented some technical issues they were having with it. They said that it messes up their sound output- causing all of the applications that are utilizing sound output to suddenly freeze and become non-responsive.

A user called YellowApple clarified that, in essence, it is a fancy audio driver- saying that he’s seen it even called DeviceGraph.exe.

He explains that possesses different modules that enable it to employ third-party code for specific audio devices.

He says that while it is generally harmless, it can eat up resources if it’s called upon to support multiple audio streams simultaneously and deal with different audio effects that you might have enabled on your Windows operating system.

It can be dispiriting to get a notice of a high CPU usage while you are, for instance, in the middle of playing an intense game. If you check your Task Manager and find that this is caused by an executable file called audiodg, don’t let your irritation and this somewhat scary combination of letters get the better of you.

Don’t make a rash move by deleting or disabling it. It pays to know about something in order to prevent more potential problems from occurring. This guide hopes that you had fun taking the hat of a tech geek to understand the nature of audiodg and solving this simple problem on your own.