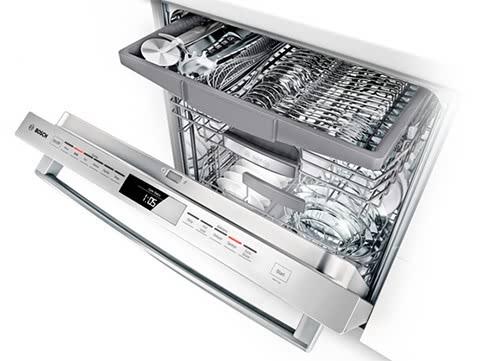 As we mentioned previously, but it bears repeating, the machines themselves are equipped with a detection system to report when it detects faults within the machine itself, by displaying the error code, or codes, for the fault on the machine’s digital read-out – usually where the timer face is shown.

The code itself is usually shown as a combination of a letter (most often E or F) followed by two numbers. These codes should indicate what the issue is, and even where, it is emanating from. So the codes themselves will tell you exactly where you should start looking within the machine to service it.

In this article, we’re going to look specifically at four more of the most common error codes that might befall your Bosch dishwasher. 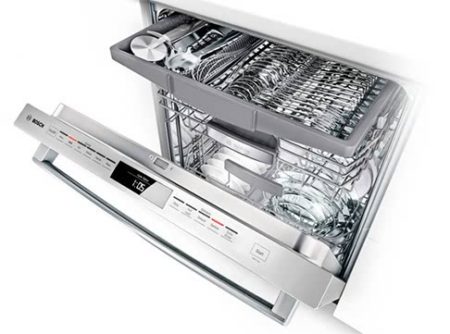 Many sources suggest that in order to resolve the issue, you would need only to pull the machine out and tilt the dishwasher back by forty-five degrees temporarily while pressing the machine’s power button to clear the error.

This will, indeed, clear the error temporarily, and allow the dishwasher to continue running.

However, in actual fact, this error means that it is likely that the machine is experiencing a very small leak, leading the water to collect in the base plate at the bottom of the machine. Once this water has collected, it triggers a Styrofoam float in the base, which then activates a micro switch, which then turns off the water inlet on the machine, triggering the E15 error code.

Tilting the machine back just tips some of the collected water out of the machine, resetting the float; this does not, in fact, solve the problem.

If you want more than a temporary solution and in order to properly fix the E15 error code, follow these simple instructions:

1. Turn off the dishwashing machine, and unplug the machine.

2. Open the dishwasher’s door, and unscrew the four screws holding the front of the door in place. Then slide the door off.

3. Next, you must remove two more screws holding the front’s lower base plate in place, and pry the cover off. Do be careful, though, as you will now have several screws exposed, which might easily injure you.

4. Now, you will need to remove the insulation behind the base plate. Carrying out this action will reveal the inside of the base of the machine.

5. In the center of the base, you will find a square plastic cover that holds the microswitch itself. The switch itself has two blue wires coming out, helping you to identify it.

7. Behind the microswitch itself, there is a Styrofoam disk, whose size is roughly four inches thick. Remove the disk and clean it off thoroughly.

8. Replace the disk in its place, and reassemble the machine. 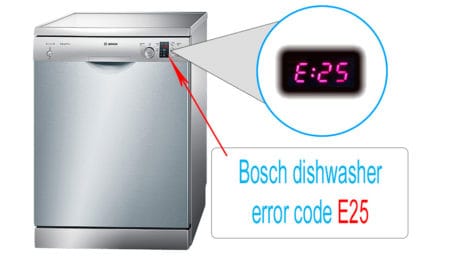 Error Code E22 signifies that there is residual water remaining in the dishwasher’s sump pump. In order to resolve the error, it is best that you check the pump for a blockage, and the machine’s filter as it may be dirty, particularly if it is functioning with a noticeable amount of grease or another type of build-up.

ALSO READ:  3+ Fixes For The Fix Error Code 907 In The Google Play Store

Any of these will prevent the machine from draining properly.

1. Turn the machine off before proceeding to disassemble the machine.

2. Remove the bottom tray from the washing machine.

3. Below it, you will find the hexagonal filter, which should have a blue arrow at its front, indicating that the filter is locked into place.

4. Twisting the filter will unlock it, allowing you to remove it from the base of the machine.

5. Next, you can remove the metal plate at the base of the machine, revealing the outer part of the filter.

6. Next, clean the metal plate you have removed from the base of the machine, along with both portions of the filter.

7. If the filters have become too caked with dirt and grime, it would be better to replace them entirely than to place them back in the machine. Replacement filters are easily available on Amazon quite cheaply but do make sure you have both the inner and outer portion of the filter.

8. Now, once the filter is replaced, click it back into place, and replace the dishwasher’s lower rack.

The machine should now operate correctly. If it still does not, it may be that the pump itself has become blocked. To clear it, follow these instructions:

1. With the filters already removed (as above), pry off the pump cover until it clicks. Grip the cover by the lug and pull it upward until it resists, then pull it forward to remove it.

2. You can now clear out the pump itself, and remove any debris that may be clogging the pump and preventing it from draining properly.

3. Now, you can replace the pump cover, along with the filter, and the dishwasher’s lower rack.

The residual water should now drain from the dishwasher’s sump pump, and the error code E22 should now be resolved. 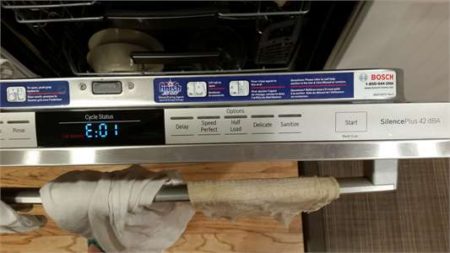 Error code 01 or E1 means that your Bosch dishwasher is experiencing trouble with the motor. Specifically, this error signifies that you need to replace the power module because the motor controller has either stopped working or is malfunctioning.

As with all the other errors that we are discussing in this article, you can easily fix error code 01 or E1 yourself.

In order to do so, simply follow these steps:

1. The first thing you will need to do is to turn off power in the dishwasher.

2. Then, carefully remove the toe kick panel with a screwdriver.

3. Once you have removed the panel, you will need to disconnect the dishwasher and pull it out. The reason behind this is the location of the power modules. You may expect the power models to be located right behind the fascia panels but you would be wrong, as they are in fact on the right side base of the dishwasher.

5. The final step requires you to pry the cover of the base taps until you open their cover. Once you have open the cover simply disconnect all the wire harnesses from the power module.

This should fix the error and your Bosch dishwasher should begin to function correctly after that.

The last error in this article, error code 09, means that there is a problem affecting the temperature.

This video should help you deal with a faulty heating element- a popular fix on YouTube for this particular error.

In order words, if you get this error on your Bosch dishwasher it would mean that there is a fault with the heating circuit due to overheating (this happens when the temperature rises to over 220° F.

In many cases, this is enough for the error code 09 to disappear and your Bosch dishwasher to work just fine again. However, there is a chance that this will not work. If it does not, it means that there is a problem with the control board that is located inside the dishwasher door, specifically in the upper right-hand corner. If this is the case you will need to replace the control board.

As you can see, error codes E15, E22, E01, E09 are all relatively easy to fix once you know the what causes them and follow the steps we have laid out in this article carefully.

If you have any additional advice for users who may have encountered any of these errors or any other feedback, please be sure to leave us a message in the comments section below.