If your voice sounds too monotonous and or you just want to disguise it, the Clownfish application lets you transform it with the click of a button.

You can also make it honeyed, husky, or singsong depending upon your preference.  The Clownfish Voice Changer is an application which helps you do it with its unique interface.

There are many other things you can do with Clownfish too.

For example, it has a text to voice converter.

It allows you to add background music to your speech. It can make your voice echo and add the chorus.

It has an inbuilt translator to translate your native language into any other global language. It can also entertain you and your listeners by converting your voice into a robot, clown, or a baby pitch, etc.

A popular video game vlogger shows you how to change your voice using the software- but warns that you can possibly get you booted from some multiplayer games for using it.

You can check out the current list of voice effects here.

You can download the Clownfish Voice Changer from their official website. There are various options for 32bit/64bit windows, Mac, Linux, and Ubuntu also. Once the.EXE file gets downloaded, you can run it for installation.

The security system on your PC/mobile can alert you about permission for installation.

Click on Allow/OK to continue. The Wizard is simple and straightforward. It will ask you only a few questions about the path of installation and the options for the shortcut. The installation is almost instant within a few3 seconds.

The installation process may stop the audio services for a few seconds during installation.

Don’t worry; they get restarted almost instantly after the installation and configuration procedures are complete. Click on the Next and Finish buttons to launch the application. 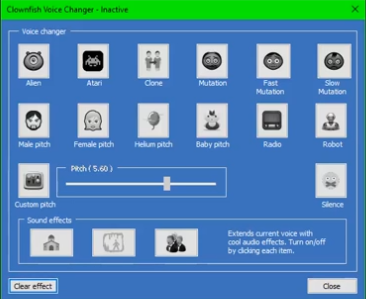 If you’re experiencing errors running the application- check out the video below. It’s helped a lot of people fix the software.

Who It’s Designed For

Clownfish voice changer tutorial is designed for Skype and similar voice chats users, Open Office users, social media users, and anyone who wants to have some fun with smoky and fruity modulation of original voice.

The voice encryption system in Clownfish allows you to send encrypted messages across the web and mobile networks.

The Clownfish voice changer can work on PC, laptop and mobile devices. It is compatible with the operating systems like Windows, Mac, Linux, Android, and IOS. For the Windows OS, the system has two versions of 32 bit and 64 bit.

The major chunk of usage is for Skype chats. It gets connected to them when you run it while using Skype which displays a message “Clownfish.EXE wants to use Skye”. If you click on to allow access, the system will display a complete menu.

Voice Transformation:  It is the most frequently used option in Clownfish. Choose Sound Effects and the type of voice you wish to mimic. There are many options like Alien, baby pitch, female pitch, robotic voice, and mutation. Of course, there are many more in the default menu. You can also increase the voice collections by adding extra plug-ins that are available from the Clownfish website.

Language Translation: The release logs 0.7, 0.69, 0.68, and 0.75 support language translation options for Skype. There seem to be some hiccups with European languages like German when the system display Clownfish voice changer not working.  The system seems to work fine with between other languages and English.

Voice Encryption: Clownfish for Skype has an encrypt message mode. The system works well for protecting your voice from eavesdropping hackers. The listener at the other end must have the app installed and connected to Skype. Then he can listen to your voice after decryption.

Text to Voice:  Sometimes your system may not have a microphone but still you may want to send voice messages to the person at the other end of Skype. Then you can use the Text to Voice option for Skype.

Listener Avatars: This voice changer app has a unique set of Listener Avatars which can be sued for changing it dynamically during Skype utilization time. You can also download customized Avatars from the online Clownfish sources.

Background Music: The voice changer allows you to add background music for your voice on Skype. It allows you to restrict the music to your system alone or customize it according to the specific requirement for the conversation.

You have to download the Android version of of the Voice Changer APK and install it.

The platform allows you to integrate the app with all the compatible applications on Android from voice changing to the music playlist. Similarly, you can install the app on the IOS platform and run it efficiently. The system works well with Team-Speak and Discord also.

Virtual Studio Technology is the art of integrating the traditional studio recording hardware systems with the advanced recording software features. You can connect the app to multiple types of audio recording applications on your PC, laptop and other OS supporting systems.

The software supports hundreds of VST effect files. The GUI control of the VST support will be available once you install the Clownfish Plug-ins from the official studio or the other compatible sites that may support the VST files and the Plug-ins.

The voice changer has a voice assistant which is available from the configuration option of the main menu. The system has a drop-down menu for choosing the languages. There seem to be at least 60+ languages on the list with multiple accents for every language.

You can set the voice to normal, slow, and fast pace. Enter the text in the box and click on read text. The system reads the entire text from start to end according to the settings that you have made. It is a great application for multiple purposes.

You can use the voice altering software for chat, music, translation, and plenty of other applications according to your specific requirements. You can also get frequent updates from the official website for performance improvement.  You can get more information about all its features here.