On to our guide.

If you suddenly see a screen like the one below from Sarah on Twitter, you’re probably thinking: “Oh no! What is going on? My computer screen is sideways! Is this the end of the world?”

WHAT DO I DO MY COMPUTER SCREEN WENT SIDEWAYS?! pic.twitter.com/idI6DjiYWP

These are probably your thoughts when you booted up your computer only to find the computer screen sideways (or worse, completely upside down). Unless you’re fine with reading lines of text with your neck tilted sideways until it snaps, or you’re willing to dangle from the ceiling just to have a better look at things, it will be for the best to fix your screen’s messed up orientation immediately.

However, before doing so, let’s get to know why this happens in the first place and how to rotate your screen back to normal.

Why Does the Computer Screen Change Orientation?

While the name of the problem is pretty self-explanatory (it’s just literally a screen that’s rotated to the left, to the right, or entirely topside down), have you ever wondered yourself why it happens?

Well, it’s good to know that there are a lot of things that can flip your display’s orientation, and most of them are harmless. Some of these causes include certain programs that can alter your screen display such as online games. Another common culprit is when you connect your computer to a secondary display such as a projector, which might cause you to change your computer screen’s orientation by accident. Lastly, an outdated or improperly installed graphics card itself might be the reason why your computer screen is sideways.

Quick Fix: How To Rotate Screen On Windows 10

The YouTuber shows you how to flip the screen in Windows below:

How to Fix (Flip) A Sideway Computer Screen?

A sideways computer screen might terrify you at first; fortunately, it is a quick problem that you can fix all by yourself. Listed below are some recommended fixes that can put an end to your spinning vision. Try them out!

Take this easy tip from Lifewire to set your computer screen straight once again by holding down the CTRL, ALT and Arrow Key buttons together.

Do you see any difference? Good if you do, but if your screen is still tilted, don’t fret yet because your hotkeys may be disabled. To enable them, right click on any empty spot on your desktop and look for something on the menu that says Graphics Settings or something along the same lines.

From there, you can activate your hotkeys nice and easy.

Another trick introduced by Windows Report suggests that you toy around with the Graphics Options by simply right clicking on any place on your Desktop and selecting Graphics Options on the menu that pops up. Choosing this option will lead to another menu to appear right beside it. Look for the Rotation option among the items on the list and click the Rotate to Normal or Rotate to 0 degrees (depending on your computer’s operating system). Hopefully, that will fix the problem.

This fix from Laptop Mag suggests that you check the Display Settings Menu on your Windows 7, 8 or 10 computer as the next option should the keyboard shortcuts fail at making things look better on your screen. Just follow these steps:

Why is my computer screen sideways pic.twitter.com/cOZN81iruf

If you are already reading this far, nothing must have worked, right? Don’t lose hope just yet because there are still more fixes waiting for you to try out! This one from Windows Report might just be the tip that will resolve your worries! Follow these steps to fix your sideways screen:

ALSO READ:  How To Open The Terminal On A Mac

Video Explainer: Learn how To Tweak Your System Display

A sideways computer screen might be a constant problem encountered by people who use convertible personal computers or tablets that are running on a Windows 10 operating system which has an automatic screen rotation feature. According to How To Geek, you can disable this sometimes annoying feature by following these steps:

6th Fix: Update Your Graphics Card or Buy a New One

If nothing has helped so far, Driver Easy recommends approaching a professional to do a check on your graphics card for more complex problems that might have caused the issue. You’ll also have to update your graphics card or purchase an entirely new one from your trusted vendor if the former is not feasible anymore. Note that this last fix takes time and can be expensive, so you might want to review the previous suggestions once more before taking this on.

A computer user complained that his screen got turned sideways while he was working on it. 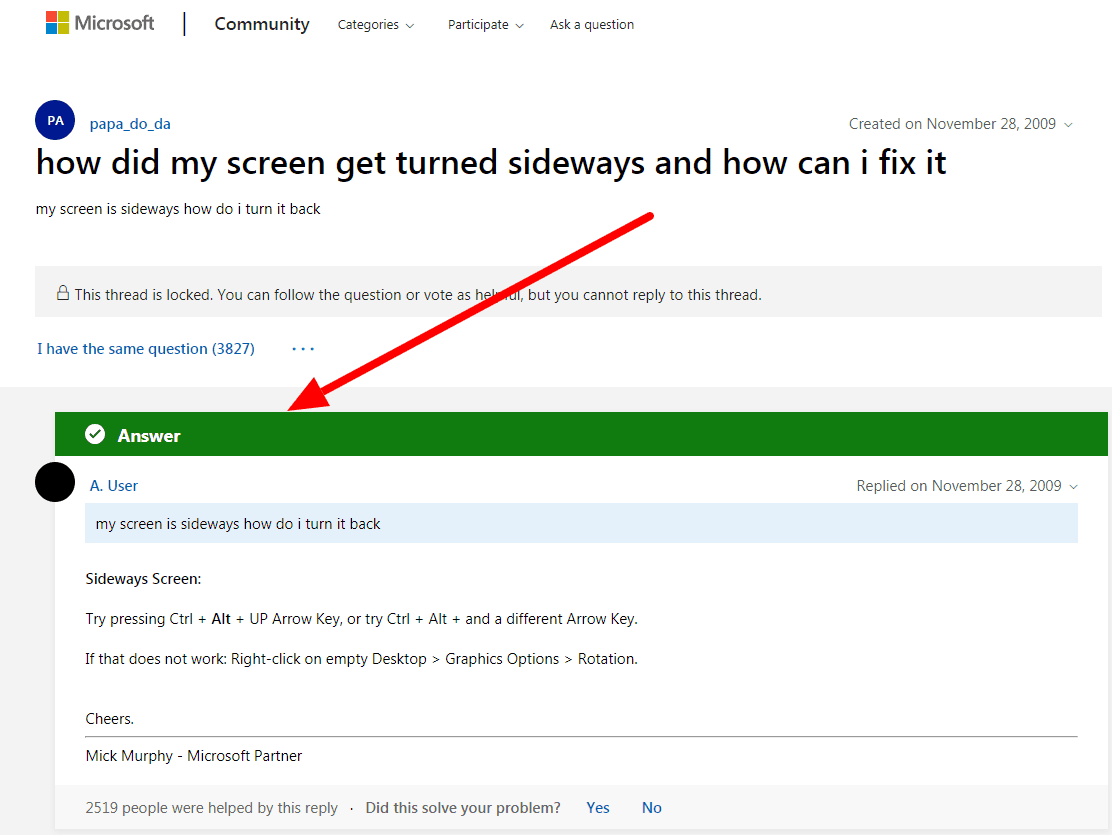 Another person also mentioned that he had a similar problem with his old Windows XP computer and that he looked for a solution online. People suggested that he tried the Ctrl + Alt + an arrow key until he found the correct screen position.

A computer expert explains that if you can’t turn your screen using Ctrl + Alt + Arrow Key, you can try the graphics option because the rotation of the screen is a feature of your graphics card.

Another individual commented that if you couldn’t fix your sideway computer screen, you might try to restore the system to a previous point. However, he pointed out that it’s a last resort measure and the problem would rarely be so serious as to require a system restore. 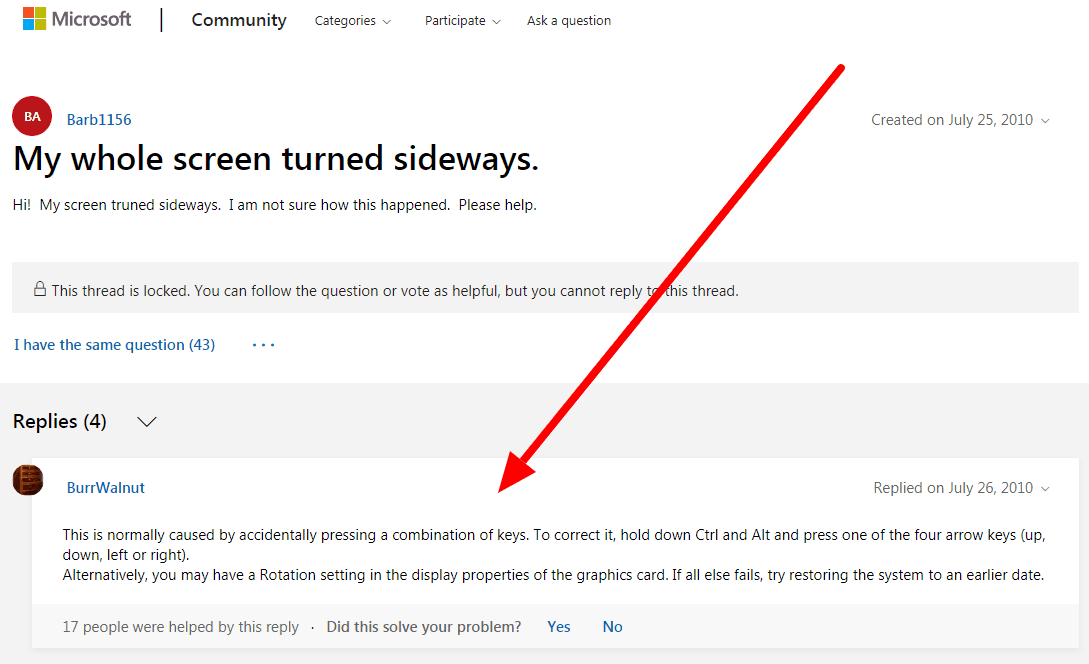 A person observes that your screen might have turned sideways because you have a problem with your graphics card if you’re certain that you haven’t pressed anything. In such cases, he recommends that you update your graphics cards drivers. The update will take care of any missing or corrupted files and should resolve your screen troubles.

Another person pointed out that you can restore your screen by clicking on the desktop and choosing Graphics Options. He also mentioned that if the Ctrl + Alt + UP command is not working your hotkeys might have been disabled.

A forum member complained that since he installed Windows 10, his screen started to turn sideways from time to time.

ALSO READ:  What Is Instup.exe And 4 Common Fixes

Another Windows 10 user also shared that he had to change the orientation of his screen several times after a major Windows update. The person was certain that he had saved his preferences to landscape orientation, but his device kept turning it back to portrait. Finally, he noticed in the settings that his device was set to tablet. After he turned it off, the problem disappeared.

Another person mentioned that he was experiencing the same Windows 10 problem and that the Ctrl + Alt + Arrow Key command wasn’t working for him.

A user said that the screen on his Chromebook suddenly turned sideways. He was cleaning the keyboard, so he supposed that he had pressed the wrong buttons.

A sideways computer screen is a problem that is often tied to your hardware’s settings, so naturally, it will not affect your files and other data. It’s also usually quite easy to deal with. Armed with the fixes listed above and the information you have learned from this article, you won’t have to worry anymore in case your display starts acting out again.