The Critical Structure Corruption issue is something that a number of Windows 8.1 and Windows 10 users experience. Frequently when they are using emulation systems and other software.

What happens is that your computer will crash and then give a blue screen of death.

In the blue screen, there will be a countdown before you can restart your computer. 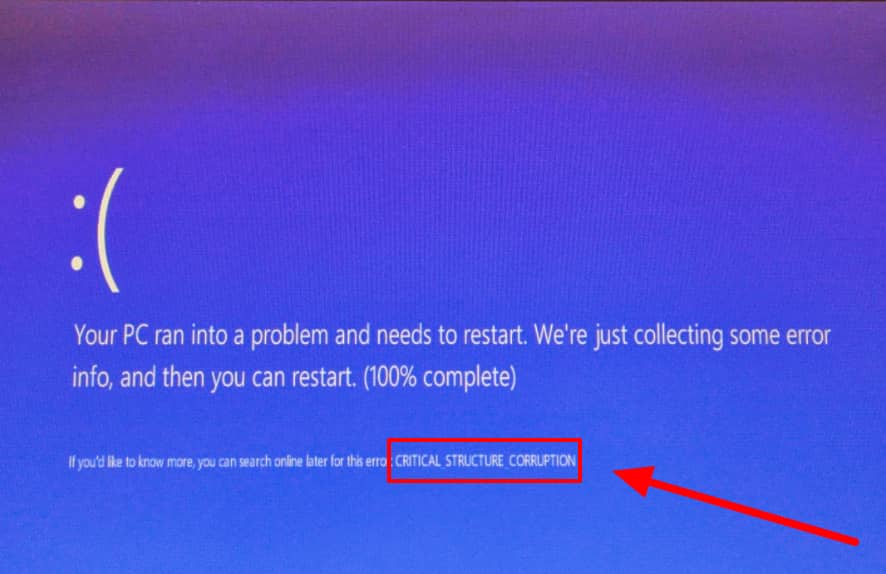 Is it a major problem?

Possibly, if you don’t attend to it right away.

Fortunately, there are ways to fix it, which we will discuss below.

First, we will determine what this error is and how it is diagnosed. After that, we’ll go through the possible ways to fix it.

What is Critical Structure Corruption?

What exactly is the error: Critical_Structure_Corruption?

It is an error inside the core of your operating system.

When you encounter this sort of error, it means that the core discovered some sort of corruption in the data inside of it.

Usually, people who use emulation software such as a duplicate OS or a MacDrive are being used in the Windows OS.

Why Does It Happen?

While emulation software can be a common culprit, there are other possible causes for the error.

Some other very common causes for this error, according to Driver Easy, would include a faulty memory card, outdated video card, corrupted hardware, or a driver that impacted the core data of the OS.

Over on Reddit, one tech explained that a critical structure corruption can take place when there’s a total hardware failure, or if a driver has inadvertently (or intentionally) tried to overwrite kernel code.

What Are The Symptoms?

The symptoms of the Critical Structure Corruption error are:

Before we dive into some popular fixes from around the internet, check out this YouTube video. It’s helped a lot of people clear the error:

As you can see in the previous section, the Critical Structure Corruption error is very serious because it could wipe out a lot of work that took hours to do.

So, when you experience any of the symptoms associated with the error message, you need to fix it right away.

Try any of these fixes to help you address the problem:

There have been certain programs that have reportedly been the cause of the error, according to Driver Easy.

One of the fastest ways to deal with the error is to simply uninstall these programs.

Once you uninstall these programs, you shouldn’t have any blue death screens popping up. These are some of the programs that have been associated with the error:

As mentioned above, one of the possible causes of the problem would be a faulty video card.

In this case, all you have to do is get the correct video card or update the video card. You can do it in these steps:

Once you update or choose the correct video card, you shouldn’t be getting the blue death screen anymore.

According to Microsoft, you may also want to try uninstalling your display driver and rebooting your computer. Here’s how:

Over on Reddit, a popular thread helps a user fix the issue. A tech professional says that, in this user’s case, an out-of-date driver is corrupting important memory, which is causing the system crash.

The Windows tech support Redditor comments that reinstalling Windows 10 might only resolve the problem if it meant the error-causing driver was removed and then not re-installed soon after.

It is improbable, he says, that there’s a problem with your actual Windows image itself, as that would not be causing this kind of system crash.

There’s a chance that the memory in the user’s computer is beginning to fail.

He recommends following this tutorial to test it outside of Windows later. Make sure you stick to the tutorial carefully, including the part about having to pass 8 consecutive error-free test runs to determine any conclusions.

The Reddit user suggested some potential updates for this user (check your own system for Driver updates):

One Redditor said that from personal research they have done, a critical structure corruption can take place when there’s a total hardware failure, or if a driver has inadvertently (or intentionally) tried to overwrite kernel code.

Neither is good. The Redditor says that hardware failure is even worse since something in the laptop or computer is dead.

If it is a driver issue and you are able to enter into Windows, try loading the Device Manager and attempt a scan for hardware changes. If something pops up with a yellow marker within the checklist, that could be your culprit.

Try disconnecting everything except the essentials like your keyboard and mouse and a single monitor, if that permits you to boot up the computer, one of the peripherals you disconnected was at fault, and you can troubleshoot as required.

If you cannot boot whatsoever, you’ll probably have to totally reset Windows.

For those who have a laptop or other computer, any 16gb USB stick may be used to create a Windows reset key, and if it’s Windows 10 you do not even need your CD key as it is saved in the bios.

While most people don’t really consider the blue death screen as a major problem that can really destroy a computer, it can lead to bigger issues if ever it isn’t fixed early.

What’s more is that you can lose a lot of important documents, files, and even programs that you need for your work.

So, if you see any sign of the blue death screen, immediately try any of the fixes given above.