In some instances, you might have noticed that your computer has suddenly become so slow that it’s almost impossible to use.

By performing a scan using your antivirus, you might come across a number of programs, and one of them would be the digital TV tuner device registration application.

If that is indeed the case, you can safely remove the program by following the steps we outlined before. But before that, let us first know what this application is all about.

What Is The Digital TV Tuner Device Registration Application?

The digital TV tuner device registration application is a scheduled task which is part of the Windows Media Center. It allows you to watch premium digital cable channels straight from your cable provider on your computer. It’s likewise known as ehprivjob.exe and is a non-system process resulting from a software that’s installed into your system.

Since most of the installed programs will store data on your system and its registry, it may lead to fragmentation which results in creating invalid entries, thus ultimately slowing down the performance of your computer.

Although the process isn’t CPU intensive, there are cases where it can affect the performance of your computer, especially when you’re running too many processes at the same time. In order to reduce system overload, it’s advised to disable processes that automatically launch themselves upon startup.

Also, issues related to the digital TV tuner device registration application are caused by the application starting the process. We have provided a few quick fixes below so you can resolve this issue properly.

The very first fix, as suggested by a Quora user, involves turning off Windows features. This can be achieved using the following steps:

2nd Fix: Look for the Process Using the Resource Monitor and Stop It

Another fix is to stop the process from running on your computer. This fix is given by a user at SuperUser and involves the following steps:

A user by the name of Bi0hazard at the Narkive Newsgroup Archive found a fix to an issue regarding the digital TV tuner device registration application stopping and crashing, thus preventing people from using their tuner on their computer.

The fix he discovered includes disabling a scheduled task at the background known as ehdrminit which follows these steps:

Another user from the same thread by the name of Patrick suggested that you delete the contents with the DRM folder. Here’s how:

However, these two fixes may not work with other users. Some claimed that they fixed their problems, while others mentioned that they didn’t help at all. If you belong to the latter, you might want to try this next method.

If none of the fixes worked, you might want to uninstall your TV tuner completely instead. This fix which is detailed by How to Uninstall Windows Programs includes a step-by-step uninstallation process as well as steps on how to delete any registry entries on your computer. Here’s how:

A forum poster complained that his computer started to behave abnormally and that it was slower than usual. He added that he used Avast to get rid of some old junk files, but the device’s performance was still not getting better. So, he used Cleanup Premium to determine, which program was slowing down his device. 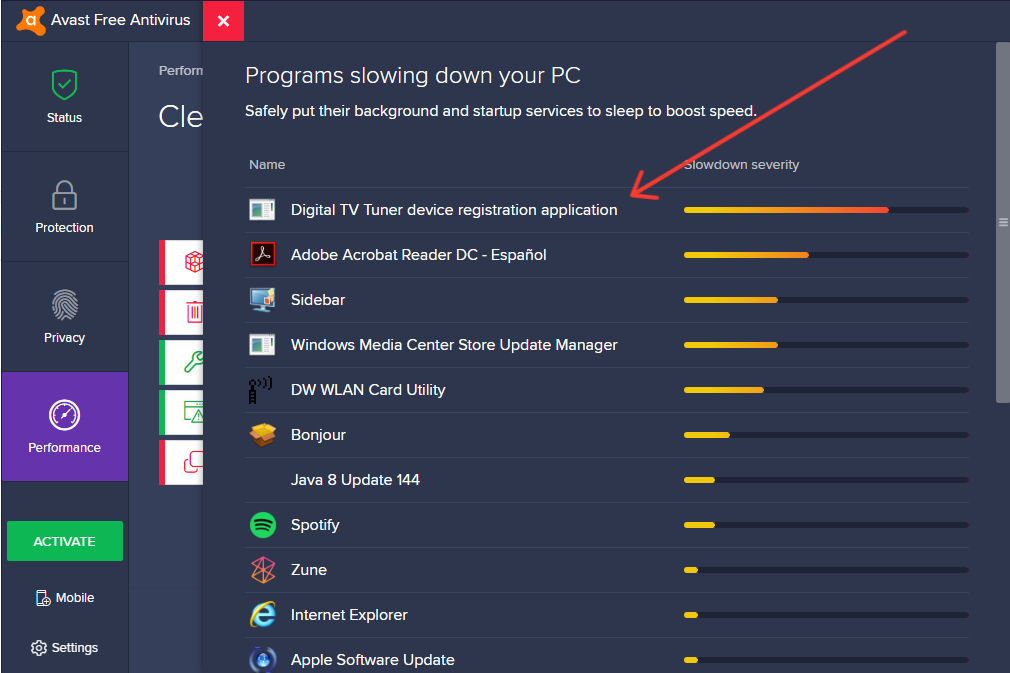 One another person also stated that Avast was showing that Digital TV turner device registration application was using too much of his laptop’s resources. The user had recently switched back to Windows 7 because his Windows 10 was performing slower than he anticipated. Another forum member advised him to uninstall and reinstall his video card to see if it will fix the problem. However, another person said that he could disable the Windows Media Center from the Control Panel.

Another computer user mentioned that the Digital TV turner device registration application was slowing down his computer by 72% and that he had noticed a significant difference in his computer’s performance. He wanted to uninstall Windows Media Center, but he couldn’t find it in the control panel, so he was wondering if there was a safe way to remove it. A computer expert explained to him that he should click on Turn Windows features on or off and that he would find Media Features, from which he could choose to disable Windows Media Center.

A forum member also observes that the process related to Digital TV Turner registration application is called ehprivjob.exe and that it’s a standard Windows process.

The digital TV tuner device registration application error can be quite annoying especially when you’re it suddenly crashes as you’re currently watching a show or movie on a digital cable channel. What’s even annoying is when it starts to slow down your computer significantly. Fortunately, these problems can be remedied by following the fixes given above.