In something like a departure for Error Codes Pro, this article is not really about a computer error or even something that could go wrong with one of your household appliances. Instead, this article is about a video game character: Error! Sans: Fight!

So, let’s take it back a little and start from the beginning by talking about Undertale.

Undertale (also written UNDERTALE in all-caps or UnderTale) is a hugely popular role-playing game that has been around since late 2015 (September 15) for both Mac OS X users and Microsoft Windows users and since mid-2016 (July 17) for Linux users.

Undertale was developed by Toby Fox, who also created and developed some of the main characters (more about this later) and composed all the music independently from any studio. Tommie Change did some additional art for the game.

Perhaps the key to the success of Undertale is that draws from some of the best-established conventions and mechanics of older role-playing games while introducing a number of significant variations. This makes Undertale the most exciting role-playing game to come out in years!

As many other role-playing games, there is a battle system in Undertale whereby different characters take it in turns. According to the Undertale Wikia website, the inspiration behind this is the Touhou game series.

According to that website, in Undertale the soul of the main character and which is represented by a red heart is constantly attacked by opponents and the main point is that the soul avoids those attacks. As it would be expected, as the game goes on and progress is made more obstacles are gradually introduced, making it harder for the character’s soul to avoid the increasingly more pertinent attacks.

Not only are new elements progressively introduced (mostly obstacles) but, also the battles change in a way that the heart (or soul) becomes harder to control as they way in which the player would control it gets fairly frequently altered.

Whenever a player gets his or her turn, he or she will be able to move through the new elements or obstacles or fighting in battle. A number of different decisions can be made by the playing including the following:

Of course, there is a story that contextualizes this gameplay. Undertale takes place in the years that followed the end of a war between monsters and human beings, which was won by human beings.

As winners, human beings have decided to seal all the monsters underground using some magic some human beings now know to perform.

The problem is that the magical barrier that it is supposed to keep the monsters at bay underground is not perfect.

But the game does not begin until a human child falls down a mountain hole.

Then the protagonist exists the Ruins, thus beginning his adventure.

Most of the main characters were created by Toby Fox either by himself or in collaboration with other people, including the following:

According to the Undertale Wiki website, the game began almost like a joke posting on the starmen.net online forum.

Then there was an early demo that was posted on the fangamer site to good reviews.

Finally, Toby Fox started a KickStarter campaign to fund the full development of the game.

We cannot explain Error!Sans without explaining the original character it is based on. 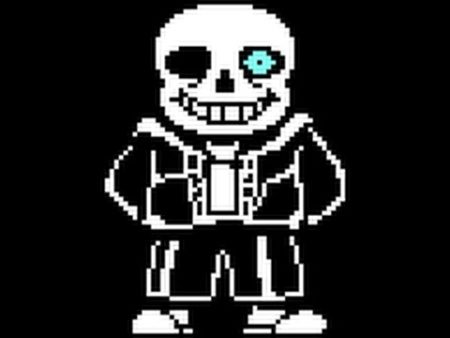 Sans is actually a secondary character in Undertale but he is the brother of one of the main characters, Papyrus. As we saw above, both characters were originally created by the game’s creator and composer, Toby Fox.

The first time we come across the original Sans is when the protagonist leaves the Ruins.

“My brother started a sock collection recently. How saddening… Sometimes I wonder what he would do… Without such a cool guy taking care of him???” – Papyrus

This character is easily recognized by his singular appearance. First of all, he’s a tiny skeleton. But if that wouldn’t be weird enough he also has a big hollowed smile coupled with huge eye orbits. So, he’s rendered quite comically.

His attire is that of a stereotypical North American teenager: unzipped hoodie, a simple t-shirt, shorts, and tennis shoes.

An interesting feature this character has is that whenever he gets angry, his eye pupils disappear.

Sans’s magical power is the ability to move objects with his mind, what is known as psychokinesis. But his abilities do not end there, Sans is also able to teleport himself and shoot laser beams in combat.

One of his quirks involves playing the trombone to his brother’s great annoyance.

In terms of his personality, the Undertale Wikia website describes it as “laid back”. But this may just very well be a slight understatement. The fact of the matter is that Sans can often be found falling asleep at the least convenient times.

So, Sans is lazy and, as a consequence, he also has trouble committing to anything.

All that said being said, Sans has his good points, too. He is great at observing people and, although he’s usually in a good light mood being quite the comedian, he can also get serious when necessary.

Like it always happens with successful canonical texts including video games, Undertale has fan fiction created around it. 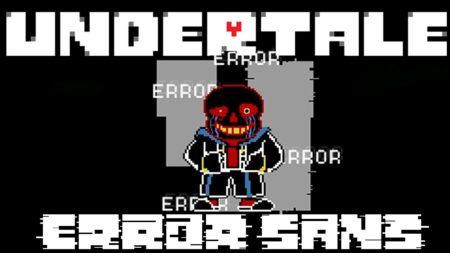 He is an alternative universe or AU hunter and destroyer who, according to the Undertale AU Wikia website was created by a Tumblr user known as Lover of Piggies.

His goal is to destroy all the AUs and anything that he considers to be a mistake or a glitch.

“Nobody’s gonna miss you. I don’t see anyone else taking out the trash.” – Error!Sans

His appearance is similar to that of Sans’s although he wears high contrast colors.

In terms of his relationship with the original Sans and his brother Papyrus is, to say the least, complicated. He refers to Sans as Sans Classic and refuses to even acknowledge Sans’s brothers Papyrus.

He has great abilities although they are hindered by some of his weaknesses. He could be considered a puppet master because his powers include blue strings to take over the control of the souls of other characters.

His major weakness is that he’s terrified of being touched by other characters. This pathology is technically known as haphephobia. This makes him feel very uncomfortable with the idea of getting near other characters.

His poor eyesight is also a major weakness. He is myopic so very often he does not see what’s at a certain distance from him. But this is not the only problem when it comes to his eyesight. Because of some of the glitches that affect Error!Sans for time to time is that his eye sockets are randomly affected by glitches. This can potentially become a big problem when this happens in the middle of combat.

Another problem is that his controls are inverted, so right is left, left is right, down is up, and up is down.

There are other similar non-canon characters related in one way or another with Error!Sans including the following:

Error!Sans is a good fighter after all, despite the weaknesses he suffers from. The problem is that his weaknesses are or at least can be, as we saw, crippling but not only that but because this alternative universe (AU) character is affected by some glitches randomly, even experienced gamers can find it challenging to play this character.

If you have any feedback for us or would like to share your own tips or your experience with Error!Sans fight or, more generally about the canon version of Undertale or the alternative universe version, please leave us a message in the comments section below.