A lot of Windows users are highly annoyed by the pop-up prompt get Windows 10.

GWXUX.exe is the file process to blame. 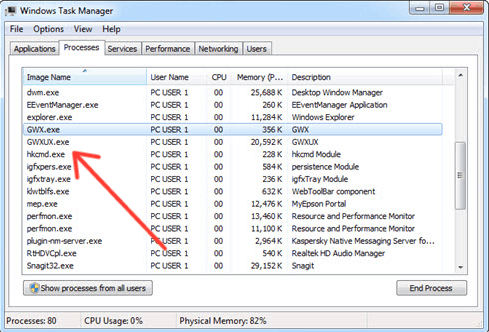 Overall, if you spotted this .exe running, it’s nothing that you should worry about because it’s not an error or a virus; however, it does tend to get pretty annoying especially if you don’t want such an update to appear.

Fortunately, there are a few ways that you can disable the popup message so that it’ll no longer show up.

Before we go on with the fixes, let’s first know what GWXUX is. 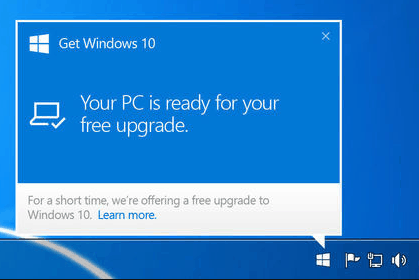 Basically, GWXUX.exe is an executable Windows 10 file that is part of the automatic Windows update.

It doesn’t really have much use except for showing popups about Windows 10.

The worst that GWXUX could do is show you an error message when you try to open some applications. These messages may appear as the following:

“gwxux.exe has encountered a problem and needs to close. We are sorry for the inconvenience.”

“End Program – gwxux.exe. This program is not responding.”

“gwxux.exe is not a valid Win32 application.”

Due to these annoying error messages, most Windows users would just disable the GWXUX or take it out completely. We’ve written up a bunch of strategies how to do that.

First, here’s a quick video that’s helped a bunch of people on YouTube:

How To Fix GWXUX Errors (And Remove It Entirely)

The first thing that you can do, as suggested by Appuals, is to simply uninstall it from the Windows Updates list.

This small fix should do the trick on this little issue. To do this, follow these steps:

Doing this is the fastest and easiest way to solve the problem. Below are a few more other fixes you can try just in case this fix didn’t work.

Another easy way to resolve the issue is to use the Task Scheduler.

This method was given and verified by members of the Windows Secrets forum.

To do this fix, simply follow the steps provided below:

Video Guide: How To Use Task Scheduler On Windows10 | Auto Start Programs Or Scripts

As mentioned above, error messages may pop out due to the GWXUX problem. When this happens, then the most likely cause would be corrupt files.

Appuals suggests that fixing or repairing these files may stop the error messages. Follow these steps to do so:

After the process, you shouldn’t be having problems with the GWXUX anymore.

Video Guide: How To: Show all Your Problems in the Windows Troubleshooting Pack

Now, another thing that a lot of people from the Microsoft community does is to just do a system restore. This is one of the last resorts that you should do because it may mess up with your files. To do this, just follow the following steps:

ALSO READ:  What is hkcmd.exe? | Plus 4 Fixes For hkcmd Errors

This will restore your system back to the state before the GWXUX update was made.

Another last resort method suggested by PingZinc is to fix the problem using the registry editor.

Now, this is another method that might mess with the files since you’re already touching the registry editor. We don’t recommend using this method if you’re not that savvy when it comes to using Windows.

If you are, then you can try this:

If you did it correctly, then you should have fixed the problem already. Be very careful with this method because you might mess up something inside your computer. You just have to make sure you follow each step along the way.

PingZinc also highly recommends that you scan your computer for viruses just in case the GWXUX problem is actually caused by a virus. There are actually times when viruses would disguise themselves as .exe files. Just follow these steps:

We examined Microsoft Answers and Reddit for some forum feedback- this is what we found:

Another individual commented that he started to get an error message that GWXUX had stopped working several times a day.

A forum member mentioned that you could remove GWXUX if you are not interested in upgrading to Windows 10 by going to Installed Updates and uninstalling KB3035583.

A computer user shared that he wanted to reserve Windows 10, but every time he clicked on the taskbar he would get the error message that GWXUX had stopped working. He found out that the issue was that the KB3035583 update had not been properly installed or it had been corrupted for some reason.

A poster commented that he tried to click on “Get Windows 10” and he got an application error. The same thing happened when he clicked on “Check your update status.” He said that he had to reinstall the application because he wanted to get his Windows 10 copy.

Another individual complained that the “GWXUX has stopped working” started to appear constantly on his screen. He restarted his computer several times, and the message continued to appear even though he had changed his setting to hide the icons and the notifications.

A computer user shared that he tried Windows 10 for a few days, but he didn’t like it. So, he reverted back to Windows 8.1. However, since then he started to get an error saying that GWXUX had stopped working and that he couldn’t find a way to remove the update from the Windows Update list.

A forum poster said that GWXUX was causing him problems when he was working online and that he had to uninstall 3035583 and KB 2952664 in addition to the GWXUX folder to remove it completely from his computer.

Another reader shared that he had similar problems with GWXUX process and that the “Get Windows 10” button was not responding. Finally, he reset the Internet Explorer settings, and he was able to install Windows 10.

A tech forum commentator stated that the GWXUX was installed by the Windows Update KB3035583 without any prior explanation from Microsoft about its purpose.

A computer user observed that his laptop (Windows 7) was working fine until the new security fix by Microsoft. After that, his computer started crashing several times a week. He finally traced the crash back to GWXUX.exe.

An individual claimed that if you remove the GWXUX update from your machine, it will disable Windows 10 reservation and that you’d have to install it a new if you want a copy of the Windows.

When we searched through various tech forums and the Microsoft support site, we discovered that people were looking for GWXUX.exe application error, GWXUX crash. GWXUX virus and GWXUX has stopped working on Windows 7. People were also looking for answers on how to uninstall GWXUX.

The GWXUX.exe errors aren’t actually that bad unless they’re caused by a virus. Since the GWXUX isn’t something that’s needed anyway, you can take it out or disable it anytime you want. In fact, a lot of people prefer to do that since it’s not that needed.

If you want to fix the errors caused by it or just disable it as a whole, then you can just follow some of the methods that we’ve mentioned above. These methods are all tried and tested, so they’re sure to work. If one fix didn’t work for you, feel free to try the other methods until you can fix the issue.