Reddit is one of the most popular sites on the Internet, but over the past couple of years, users have been complaining about error codes such as 503, 405, 403, 504, etc.

This all are similar in what they do to you so I will be teaching you today how to fix them each.

There will be some general tips that may work for all of them and some specifics.

They all are essentially telling you that you can’t connect to their server for whatever reason, which can be extremely annoying, especially if you are a diehard Redditor like myself. So if you want help fixing these errors then you’ve come to the right place. 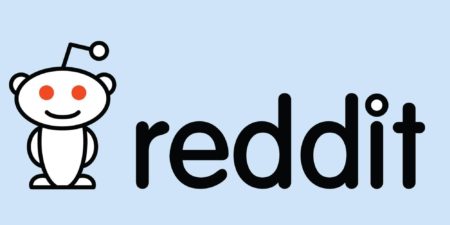 Reddit is personally one of my favorite websites out there because of all it has to offer. Its slogan is “the front page of the Internet” and that is definitely true.

It has information on any subject matter that you could possibly think of.

When I say any, I mean anything. News, humor, job-specific pages, skills, DIY projects, fan theories, the list goes on and on. If you’d like to read about the most interesting subreddits written by yours truly, check out this article.

Each of these subjects has their own “subreddits” as they are called and anyone can post in them. That’s what makes this site so unique. Once you post on a page, people can like, dislike it, or leave a comment, which can lead to a long thread of interesting commentary and discussions.

It’s basically the most massive forum online, with interesting discussions taking place all the time about interesting subjects.

It started out back in 2005 as a desktop only site but has since moved to including an iOS app as well as an Android one on the Google Play Store. I mention that to make the point that these errors are not specific to either of these versions, but can happen whether you are using your desktop computer or your mobile device.

It’s kind of funny, but I actually got a lot of these solutions that I’ll get to later from Reddit. They have subreddits about Reddit and these solutions are ones that other users recommended as they said they worked for them.

“Reddit is where anyone can come and tell their real story.” – Yishan Wong

What Are all of These Errors?

These errors are all similar in nature and there are a couple of small details that separate them, which can be difficult to see. Here’s a brief overview of what exactly these common errors mean and what exactly they are telling you. 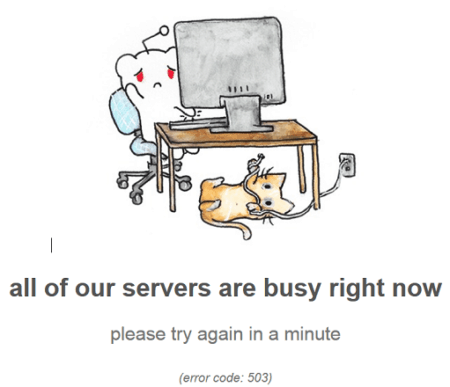 503 and 504 are so similar that the difference between them is technical and beyond the average users grasp, so I’ll be including them together in this post.

Probably the most common error on this list and as you can see from the screenshot above, these errors tell you that their servers are busy. You really wouldn’t expect this to be common for such a massive website like Reddit but unfortunately, it is all too common.

The worst part about it is that there’s not much you can do to fix it, except try again in a couple of minutes.

405 occurs when you are trying to post something on a page. It won’t let you post and this error will come up which can be super annoying if an awesome thought popped into your head. It’s not as bad at 503 or 504 though, because at least you can still access and view the site.

This one also occurs when you are trying to post in a subreddit, but for a different reason. The message will read that you are “forbidden” for doing so, and it usually means that you are banned. So it’s not as much as an error message as it is telling you that you were banned for some reason. 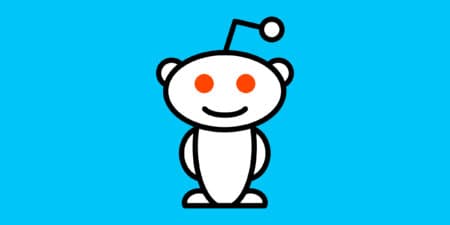 How to Fix Them

I already touched on that there are some solutions that you should try first for all of these as they are all similar errors.

If you try those and you are still receiving this error, then move on to the more general solutions for the individual error.

This one is obviously only relevant if you are using the app and if you are this may do the trick. Simply just delete the app from your smartphone and then download it again. You’d be surprised how effective this step which takes only a couple of minutes can be.

Solution #2 – Try Accessing It With a Different Web Browser

This is essentially the desktop version of the step above. Several of these errors are web browser specific, so exit out and try all of your other web browsers to see if that will work.

Many times the two general solutions above will fix the problem. However, if they don’t, consider trying these steps which are specific to each error.

Again, these codes are so identical that I include them together. The honest truth is the error is on their server as it is overloaded with traffic.

That means, unfortunately, that there’s not much that you can do to fix it. I know this is not what you want to hear at all, bet the best thing that you can do it just wait a couple of minutes, refreshing your browser.

The biggest thing that usually gets rid of this error message is to use Reddit on Chrome as most commonly it happens while using Firefox or Safari. That goes along with solution number 2 above. It also effects mobile commonly, so if you get this error using the mobile app, then consider trying to access Reddit in the browser on your phone.

So as you can see from the description of this error, it is telling you that you are banned from posting in whatever subreddit.

This isn’t so much an error as it is telling you information. If you have an idea about why you might be banned, like posting inappropriate or vulgar content or posting false information, then these are all reasons why the moderator of a subreddit might ban you. If that’s the case, then there’s really nothing you can do, as it’s your fault you got banned in the first place.

However, if you have absolutely no clue as to why you were banned, consider contacting the moderator and asking. It may be an error or they may have done so by mistake.

Also, one feature that most people aren’t aware of, is an auto-ban feature that some subreddits enable. It works like this.

If you post anything in a subreddit deemed offensive, then you are automatically banned from the other subreddit. Not many have this and I wasn’t even aware of this and it can confuse people as to why they are banned. Check to see if this subreddit has it; it’s usually in the description.

Summing up this section, here’s the worst but honest truth about these errors. Sometimes, there’s just simply nothing that you can do about fixing them, and calling customer support of any kind won’t do you any good. Reddit is a simple but immensely popular site and sometimes their servers are just overloaded.

If you’ve gone through all of these solutions and you are still getting this error, then my best recommendation would be to just walk away and come back in an hour. It should be back up and run by then.

Many times the errors we talk about here aren’t that common and you probably won’t ever experience them when using whatever the system is.

For instance, there are many Windows codes we have detailed, but you may have never even gotten one even if you’ve been a PC user for life.

Users have reported about several of these errors happening very frequently, like 50% of the time they log in.

These reports are mostly from around a year ago and it appears that Reddit has done a somewhat decent job in fixing these. However, if you use Reddit a lot, the chances are high that you may receive one of this errors at least at some point.

That was my purpose for writing this article.

Because out of all the error codes on this site you may be using this article the most. It’s important that you know how to do these quickly, so you don’t spend all of your time trying to fix these annoying problems. You can also see that they are actually quite easy solutions that anyone with basic computer skills can do.

The worst part is that many of these are simply not fixable as you’ll have to wait for the ones out that have to do with overloaded servers.

They really are very similar, as are they methods on how to fix them. Anyways, I hope you enjoyed this article and good luck fixing these problems. If you’d like to read more articles that I have written on this site, then check out my page.