The HPWuSchd.exe (HP Windows Update Scheduler) file is generally found in the HP Printers and Scanners software when you install a printer driver in your computer.

This file is often used for updating the drivers of the printer when needed.

While it does have its own use from time to time, some users complain about it hogging resources. Or they might have installed it from a third-party site that’s bundled in a bunch of adware/malware. 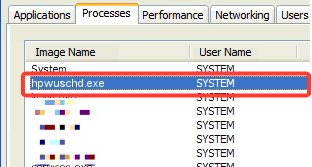 Fortunately, there are ways to either disable it or fix it, depending on whether you want it installed or not.

We’ll discuss what this executable file is, where it can be found, and how to fix it if it does cause any trouble.

As previously mentioned, HPWuSchd.exe is a file component in an HP driver that looks for updates and updates the driver. It can usually be found under C:\Program Files\Hewlett-Packard\HP Software Update/.

As it is a minor file, it won’t cause you much trouble except that it may slow down your computer or give you frequent error messages when you print. HP also says it’s OK to remove:

The error messages are often caused by corrupt or missing file components, disabling you from making use of certain functions for printing.

However, there are times when the HPWuSchd.exe is actually a virus or a malware that duplicates or disguises itself as an .exe file to enter your computer.

When it is, then it might cause you some real troubles. These may include extreme slowing of your computer, deleted files, and frequent crashing.

If you are experiencing problems with HPWuSchd.exe, you need not worry as you can fix it easily. Try out one of these fixes and see which one works best for you.

The first thing to do would be to simply delete the program in the Control Panel. Here’s how to do it:

Alternatively, you can also look for it under Program Files and just delete it. As it is not such a crucial file, it won’t really affect your printing activities.

Your HP driver just won’t automatically update anymore, but that isn’t really something that you should worry about.

If you can’t seem to find the .exe file, then another way to address the problem would be to download AVG TuneUp and automatically delete it from your computer. Here’s how to do it:

By doing that, the HPWuSchd.exe should already be deleted, and all your issues should be fixed.

You will notice that your computer will run a little bit faster, and you won’t be getting those annoying error messages anymore.

As mentioned earlier, there is the possibility that HPWuSchd.exe is a malware or virus that’s disguising itself as an executable file.

If your computer is really slowing down, then make sure you do a complete virus scan.

Either AVG or Avast Antivirus is a good choice. Here’s what you should do:

Doing a virus scan is important because you don’t want the potential virus to spread. It may take a while to complete the scan, but it’s definitely worth the wait.

While the HPWuSchd.exe is generally not harmful, it does get in the way of some of your printing activities.

You can use any of the first two methods above to get rid of it, especially if you don’t want to see any more issues regarding it.

The only time it’s going to get a little dangerous is if it is a malware or a virus. In this case, then you should immediately do the 3rd fix so that you can nip it in the bud.

With these three fixes, you should be able to handle the problem with ease. So if you notice that you’re getting errors that are HPWuSchd.exe related, try them out.