If your antivirus is warning you about the malicious presence of an executable file called “hxtsr.exe” (HxTSR stands for Hidden Executable To Sync Remote Servers), don’t worry.

Most of the time, that executable file is not a malware. In fact, it’s part of the Microsoft Office Suite and is a built-in component in your computer.

However, your antivirus software alerting about a potential threat only means two things: the file is legit, or a malware is disguising itself as an “hxtsr.exe” file.

It should be noted that there are ways you can use to identify which is legit and which isn’t. You also have a few quick fixes to fix errors related to this executable file. But before that, let’s first know what the hxtsr.exe file is.

The hxtsr.exe file is part of the software component of the Microsoft Office Suite. It can be found as a subfolder of the program files list. The “hxtsr.exe” file is not malicious. It is not considered as a Trojan or virus and is definitely not a spyware.

According to File.net, it’s “a Microsoft compressed executable file called “Microsoft Outlook Communications.” It establishes and maintains contact between the Outlook 2013 or 2016 app from the Windows Store on the user’s computer and Microsoft’s Outlook.com, Outlook.office365.com, or Exchange e-mail and calendar websites.”

This executable file is actually a compressed file that is not part of the Windows system file. Due to that, the technical security threat of “hxtsr.exe” is pretty high. This is the reason why antivirus programs find it malicious.

If you have this issue, the following quick fixes can help you.

How to Fix Hxtsr.exe-Related Errors

Lots of computer users complain that the “hxtsr.exe” file is causing their computer to crash and block their access to Microsoft Outlook. According to Windowsreport, it is better to update your computer’s operating system. Many times, it will resolve the issue.

If an “hxtsr.exe” file can be found in the System 32 folder, it most likely confirms the presence of a malware in your computer. To fix this situation, use an anti-malware software such as Malwarebytes to run a full system scan on your PC.

Video Guide: How To Remove A Computer Virus / Malware

Running a Microsoft Safety Scanner is another alternative that can be used to check if the “hxtsr.exe” file is legit or a malware in disguise.

The Microsoft Safety Scanner is a tool that is designed by Microsoft to remove malware from your computer. Though it is not a replacement for your antivirus software, it will provide the latest virus definitions that can guide you on the next step in dealing with the malware.

3rd Fix: Reinstall The Program Associated With The Error

Solvusoft suggested that if the hxtsr.exe error is related to a specific program, the best solution is to reinstall it. However, you have to make sure you uninstall it first. Here’s how:

For Windows 7 and Vista

After the uninstallation process, simply download and reinstall the program/(s) you have deleted. This should fix the issue. However, if it still persists, we suggest trying the next few fixes.

According to File.net, to avoid the problems that are related to “hxtsr.exe” file, you should regularly clean your computer.

This means consistently scanning and cleaning your hard drive and uninstalling all files that are not needed anymore. You also need to enable the Windows automatic update

6th Fix: Install a Fresh Copy of Your Windows OS

The final option that you can do to resolve the hxtsr.exe error is to perform a clean installation of your Windows OS version.

Doing so will delete everything in your hard drive including the anomalous file. It will allow you to start new and fresh with your computer minus the malware problems. It is, therefore, advised to back up all of your important document and data.

We searched through several tech forums like this one to find more information about HxTsr.exe and people’s problems with this Microsoft process. In general, people are looking for HxTsr.exe stopped working, HxTsr.exe Outlook, HxTsr.exe virus, and HxTsr.exe disable. They also wanted to know if HxTsr.exe is safe.

A forum poster comments that HxTsr.exe is a legitimate process and that it’s connected to the older versions of Microsoft Office. He says that it’s a compressed executable file, which establishes and maintains a connection between the Outlook application on your computer and Outlook.com. The user adds that you can find HxTsr.exe in a hidden folder in WindowsApps (found in Program Files) and that some antiviruses might detect it as a virus because of its compressed structure. 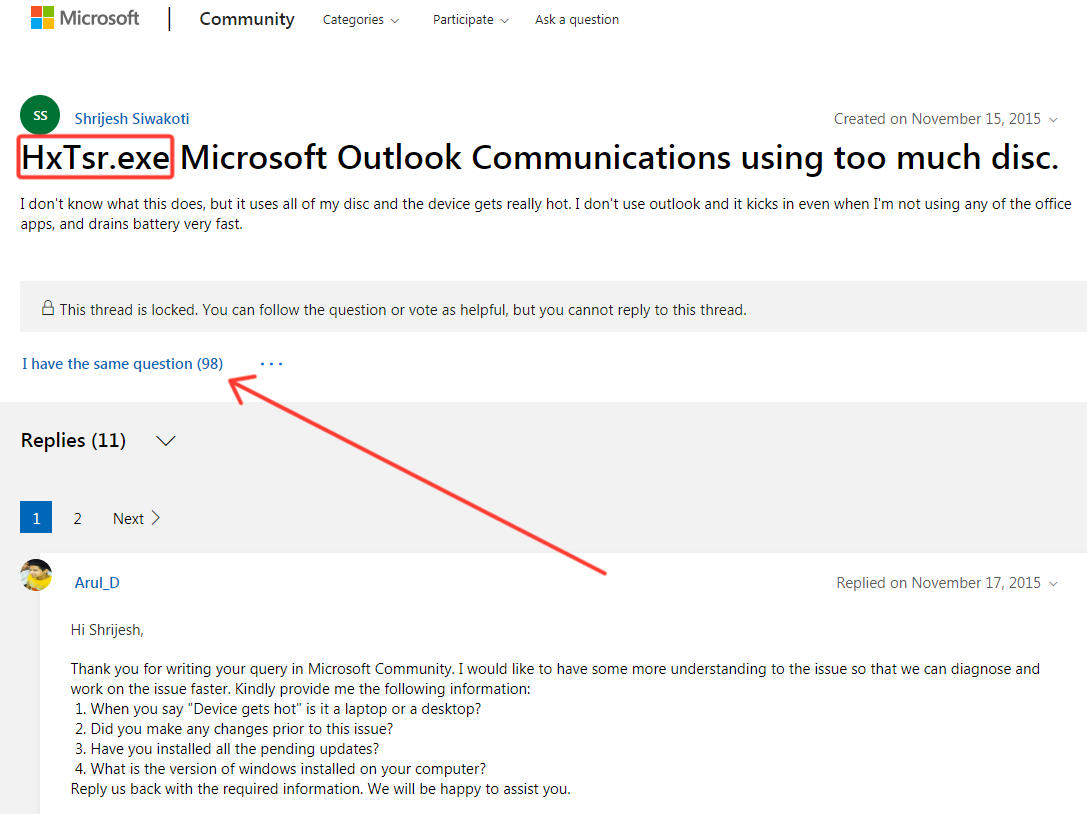 Another forum member stated that there was a virus very similar to HxTsr.exe and that it would be hard to make a distinction between the two. He said that one of the ways to find out if it was malware was the location of the exe file. If it’s in any other folder than Program Files, it could be something potentially dangerous

An individual commented that he was not sure of the purpose and functions of HxTsr.exe and that it looked suspicious to him. He also mentioned that he wanted to trust Microsoft and that he thought they had better ways to explain to their users what the process was for.

Another person reported that he didn’t understand if and how important HxTsr.exe was for the proper function of Outlook and that he removed it from his computer. He didn’t have any problems after the removal, so he concluded that it wasn’t really necessary. The computer user also stated that HxTsr.exe was listed as unknown in the Microsoft portfolio, which confirmed his suspicions.

A person also shared that he attempted to run HxTsr.exe on his device, but the antivirus program blocked it immediately. He tried to do it several times, bit each time the result was the same, which made him remove the exe file as a safety precaution.

A forum member also reported that SpyHunter 4 detected HxTsr.exe as a virus and blocked it immediately. One more computer user also shared that he had SpyHunter 4 and it that asked him whether to block or allow the HxTsr.exe because it was Unknown Object Execution.

Another individual said that the file appeared and disappeared on its own and that it was color-coded green and red. He added that he didn’t trust it and advised other users to remove it.

A person complained that his antivirus program – Avast – warned him that HxTsr.exe was trying to open a web page through a secure connection to an unknown IP address. That seemed very unusual behavior for him, and he blocked it immediately before his device got even more compromised.

One more computer user stated that HxTsr.exe was trying to connect to some foreign IP through a port and that it was taking a lot of bandwidth. In addition to this, tHxTsr.exe was sending information through the port, so he was certain that he was dealing with malware.

Another forum member admitted that he clicked on a phishing email and that his antivirus started to block HxTsr.exe immediately after that. He concluded that the file must have gotten infected through the phishing email. He advises that you pay careful attention to what you’re opening or you might get infected too.

A person reports that Norton Antivirus warns that HxTsr.exe is asking permission to access the computer through the Internet connection. He wasn’t sure what to do so he contacted Microsoft support for help. They explained that HxTsr.exe is legitimate and that the antivirus might detect it because it doesn’t recognize it. The user wasn’t feeling very convinced by the explanation and decided to block the exe file for the moment.

A computer user running Windows 10 got a warning about HxTsr.exe. He was using Avast and that it showed him that HxTsr.exe was not signed by Microsoft which immediately raised his concerns about its possible function.

Another computer expert explains that most antivirus programs cover themselves by labeling HxTsr.exe a virus. He advises that if the file is located in a System 32 folder, you should run a full system scan and to use malware-detecting tools. The expert also states that HxTsr.exe is not a Windows system file and that it’s not necessary for the proper function of the operating system.

A legit hxtsr.exe file is not something to worry about. However, a malware that is disguising as an executable file can cause problems and errors to our computer. Fortunately, the different fixes above can be done to resolve the issue.