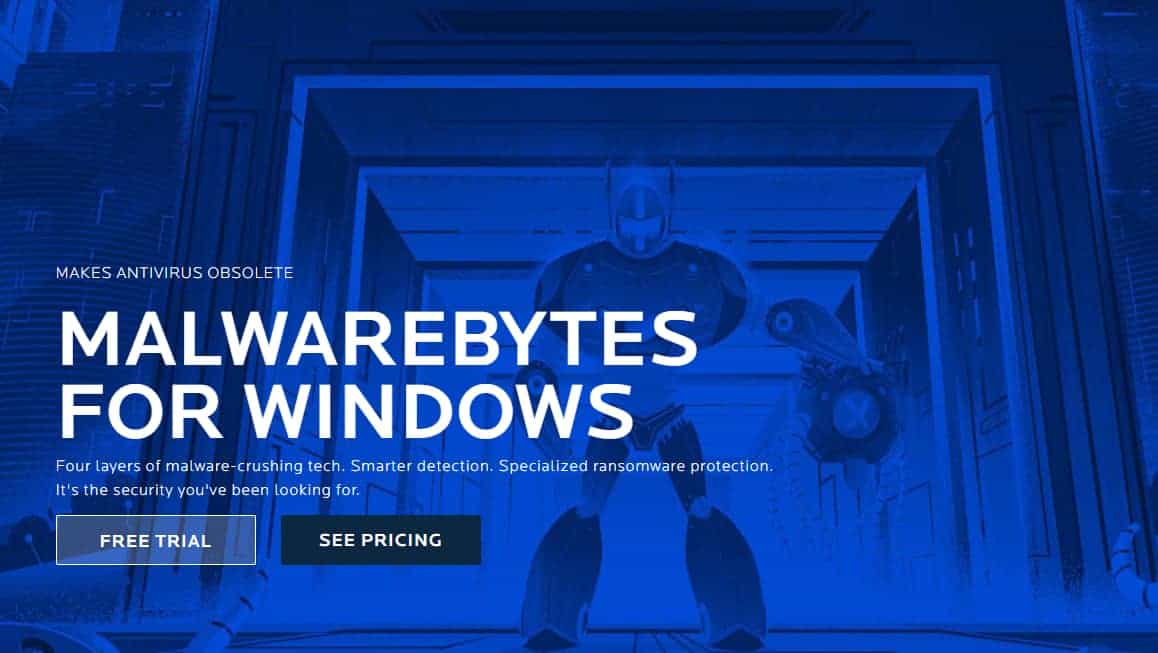 Malwarebytes (formerly known as Anti-Malware, and also commonly abbreviated as MBAM) is an anti-malware software service.

It’s compatible with Microsoft Windows, macOS, and Android. It’s designed to search out and remove malware.

A product of Malwarebytes Corporation, it launched in January of 2006.

There’s a free version that you manually initiate and a premium version that includes automatic scanning, scheduled scanning, real-time protection, as well as flash-memory scanning.

After in-depth research, the conclusion we’ve come to is that Malwarebytes is safe. Indeed, it’s one of the top-performing Malware detection and removal tools on the internet.

It has over a 4.0 rating on CNET from users.

According to the Global Moderator of Bleeping Computer, however, it’s still best used as an adjunct anti-malware solution to complement and strengthen your computer’s protection when employing a traditional anti-virus solution.

The one thing to know is that while there is a free plan, everything is manually initiated. That’s useful for one-off scans and removals. But you’ll have to pay for ongoing, automated detection.

According to a Tom’s Guide moderator, it is safe to use and is one of their go-to resources in their “Simple and free guide to removing malware” tutorial.

This was in response to a user who posted in their forum, concerned that the software service might be a Trojan Horse in and of itself: serving malware pop-ups that could lead to a system shutdown.

Because his personal computer’s operating system had recently been infected with a virus that his antivirus hadn’t been able to detect or remove, he used the Click4Support service who employed the Malwarebytes anti-malware tool.

Since the computer is currently clean, he wondered whether he should remove the tool.

One of the top replies came from a user who explained that it’s a great tool but must be deployed alongside a proactive antivirus software.

Especially if you’re on the free plan, it’s not automatically scanning and protecting your operating system or proactively inspecting websites and emails.

How To Use Malwarebytes (Video Walkthrough)

According to many Quora users, Malwarebytes is one of the few high-quality, desktop utility tools in a world of scam programs with manipulative upsells.

According to one Quora user, JD Power and Associates has rated it the best for several years.

Over at Bleeping Computer, one user was somewhat skeptical of Malwarebyte’s efficacy.

He explained that he had downloaded a suspicious RAR file and was relying on this secondary malware scanner to evaluate it.

He knew it was definitely a malicious executable program, but Malwarebytes apparently didn’t detect it. He verified that it was malicious by using the VirusTotal website (link to the analysis).

This made him skeptical that Malwarebytes could provide fool-proof protection of his operating system.

The top response came from a user who said that no single malware service is 100% foolproof and can prevent, detect and remove all computer threats at any given time.

Because the security community is constantly in flux, with new infections appearing constantly, it takes time for new malware to be reported, analyzed and verified, before they can be incorporated into new database definitions.

Another interesting point was that with zero-day malware it’s unlikely the anti-virus is going to detect anything.

If you don’t know, zero-day malware refers to malware that is exploiting a software vulnerability for which there is currently no available defense or fix.

So when it comes to updating virus definition files, malware creators have the advantage since they are first actors and the good guys are constantly playing catch-up defense.

No matter how hard they try, the virus creators are first movers- there will always be a short window of time during which a malicious file will go undetected and can potentially infect a computer.

The video does work– even though the thumbnail is missing!

Testing: According to the video reviewer, “I have a really infected computer here. I just loaded some fresh malware a few minutes ago, plus all the other malware had from the previous week. So, let’s see if we can get this PC somewhat operational again, it is very slow.

ALSO READ:  What is SearchProtocolHost.exe? | Plus 3 Fixes For Common Issues

Whenever I go to a customer’s house or they bring their computer to me, this is my go-to tool just to kind of go ahead and like make a serious dent in whatever malware they have on their computer.

Verdict: “Malwarebytes did a pretty damn good job. I mean there was only one thing that wasn’t picked up on: it was some kind of little installer, but no big deal anyway.”