In this post, we examine jucheck.exe– providing several fixes to either remove or disable it.

If you’re a Windows user, then you’ve most likely seen a pop up that said something about Jucheck.exe, the Java Auto Update service.

Now, you’re probably wondering what this is and whether it’s safe or not.

The simple answer is — it can be generally safe, although there are also times when it can be considered a potential threat. 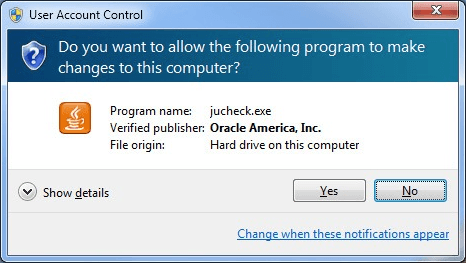 In order to know whether jucheck.exe is dangerous or not, you must first know what it is and what its functions are.

From there, you have to know what use it has in your system so that you’ll know if it’s useful or if it’s harmful.

The first thing that you have to know is that Jucheck.exe is an actual and legitimate file. 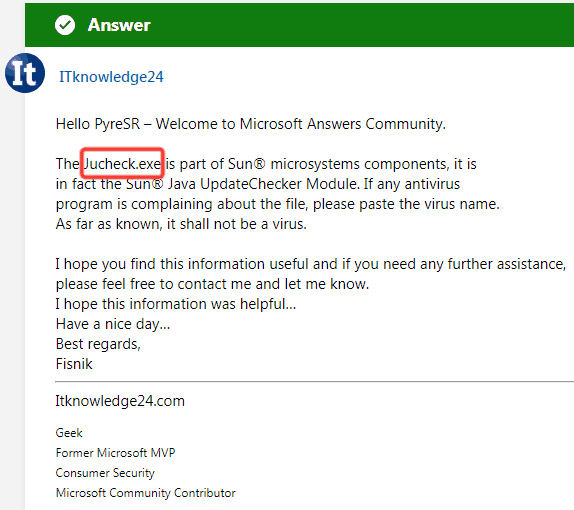 It is a file component created by Sun Microsystems and is a part of your Java program.

It checks for Java updates and notifies you if you should update your Java. It is a pretty useful file component if you use a lot of Java and would like to know if there is a new upgrade that you have to download.

On the other hand, it is possible that your jucheck.exe component is a virus.

A virus can be manipulated in such a way that it will resemble your genuine jucheck.exe component. But in reality, it is just a virus in disguise.

This is the time when jucheck.exe is harmful. Moreover, you won’t really know because even the virus-laden jucheck.exe will have similar functions to the normal jucheck.exe. You have to do a full diagnosis if you want to know whether it’s a virus or not.

This usually happens when the Java installed in your computer is not genuine.

It may contain viruses or malware that can completely infect your computer and get all your files deleted. Luckily, there are certain ways to prevent this from happening and ways to fix it if ever it’s already in your system. Here are a few fixes you want to consider:

How To Fix jucheck.exe Issues

That way, you won’t be bothered by the constant updates and be plagued by a virus.

Appuals tells us how to do that in a few steps:

If you want to keep the Java Auto Update, you have to diagnose whether or not your Jucheck.exe is a virus or not.

To do this, a blog post from DeleteMalware suggests that have to first determine the location of the file. Here are the steps to do that:

The next thing to do is check if there is a jucheck.exe elsewhere other than Program Files. DeleteMalware mentions that they are usually found in these two folders:

If it is found in any of these folders, delete it.

Another way to diagnose your Jucheck.exe is to check the publisher.

An article from Appuals has detailed a few steps on how to do that:

Video Guide: How To Check The Digital Signature Of Windows Executables

In the video, the vlogger demonstrates how to check the digital signature of Windows executables with the Properties dialog.

By now, your Java should be safe and free of any viruses.

However, there are a lot of Windows users that have been complaining that the Java Updates are a bit of a nuisance because it always boots whenever they turn on their computer.

Fortunately, there is a way to fix this as mentioned by a blog in Appuals:

If you do this, then you shouldn’t be experiencing anymore booting nuisances brought on by the Java Auto Updater.

We examined several popular forums to get a deeper insight into this particular file process.

The majority of people were searching for answers to questions regarding ‘doesn’t exist’ issues, 32 and 64-bit problems, application errors, pop-ups that are appearing, the fact that the process wants to make changes on their computer operating system, that it has stopped working and its relationship to Oracle America.

Over on File.net, one user said that he found it in “WINDOWS\Prefetch as well as \Program Files\Java\j2re1.4.2_03\bin\”. Another used advised that you can remove it by accessing Java settings and disallowing its ability to check for updates automatically.

Another computer user clarified that is primarily responsible for accessing the internet to find available updates for your system’s Java virtual machine. When and if these updates are actually available it will notify you and helps you manage the installation of the updates.

A security conscious computer user found several instances of it running on their computer- they even found one in win32 that was triggering a security alert. They decided to remove that instance of it.

Another computer user was concerned because when he tried to conduct a file search to locate it, he found that it was hiding its location. Therefore he concluded that it was potentially malware, a virus, spyware or some other type of malicious executable file.

A video gamer said that the pop-up alerts occurred whenever he was gaming, crashing the game, so eventually, he caved in and decided to completely uninstall Java from his Windows operating system.

Another computer user that was employing Norton Antivirus used the antivirus program to verify that it was safe.

Another computer user had some negative experiences- saying that in their experience they had come across this particular file process but it was actually a virus. He did say, however, that many malicious hackers will use a commonly known and accepted file process to name their malware so that it goes undetected.

Another user had a curious problem- they right click on the Java taskbar icon to access properties and then on checked the auto-update feature.

However, when he restarted his computer, it rechecked itself to be able to automatically update. He decided to use the Add/Remove Programs functionality to completely eliminate from his computer.

The thing about most executable files is that they are easy for viruses to replicate. That’s why it’s not surprising if there is a virus or Trojan that is disguised as jucheck.exe even though jucheck.exe itself is a legitimate file that has functions for Java.

If you suspect that the jucheck.exe popup you’ve been seeing is a virus, then follow the steps given above to diagnose whether it is or not. Of course, you do have the option to just completely disable Java Updates as a whole to get rid of all the problems (this is given in the 1st fix). However, you still need to scan your computer since the viruses disguised as jucheck.exe are usually not in the Java folder.

In any case, it’s really important that you know how to solve issues regarding the jucheck.exe virus otherwise all your programs and files run the risk of being deleted. The fixes that are given above can most definitely help you with that.

ALSO READ:  What Does WPS Stand For On A Router