In this post, we’ll provide some KB4056892 fixes if you’ve run into trouble with this update.

If a Windows update won’t install, there are several things you can do to clear the update queue so as to allow the updating of a cumulative update.

Many people find it difficult to install the KB4056892 update, and it causes more problems than Microsoft acknowledges. Luckily, there are fixes to these problems.

There’s a good deal of social reaction to this problem:

This is due to the repetitive and simplistic nature of ADD, CALL & MOVs it introduced.

In case some people aren't aware – make sure to install the windows update KB4056892 if you didn't get it automatically today! Fixes the recently discovered meltdown + spectre cpu design flaws which could be exploited by viruses/hackers.

Here is how to check if you got the Windows 10 patch for the #Meltdown and #Spectre flaws: In Windows search for "update history" and check that you got a patch labeled KB4056891 or KB4056892.

If you have issues, Avira Software Updater Pro will help installing the patch. pic.twitter.com/2plrsJBMmc

The KB4056892 update can be downloaded and installed automatically from the Windows update. However, most of the users have reported that they are unable to successfully install this update. When installing the KB4056892, it may pause at 99%, and it can show disk usage especially if you used the Reset this PC functionality to reset your device.

According to the people’s report, once the update is installed, it crashes at boot then gets stuck in the boot loop. Rebooting the system does not solve this problem, and in most cases, it sends a BSOD error code 0*800f0845 and a constant reminder to install the KB0456892 update.

Also, in most cases, installing the KB4056892 causes a high risk of system crash and may put the PC to an unbootable state. Based on the people’s report, the majority of the computers powered by Intel, AMD, Athlon, and ARM processors crashed after installation of KB4056892 update.

Another problem reported by users is that the KB4056892 update crashes the browsers. The update causes the browser window to become white. This then causes it to freeze for a few seconds before crashing.

Many computer users hate the update KB4056892 and have reported that it breaks their devices, making it impossible for them to use it.

For this reason, most users are looking for fixes and quick ways to prevent the update of KB4056892 on their computers. While most people choose to uninstall the update, this will not fix the problem since the OS will download it again. Here are some ways that you can use to fix the problem:

One of the easiest methods you can use to fix the KB4056892 cumulative update is to stop the Windows update. To do this:

When you do this, no updates are installed until you enable the Windows Update Service again.

Video Guide: How to Disable Windows Update on Windows 10 Permanently

Similarly, you can choose to pause the updates on your computer in order to avoid installing the KB4056892 update. This will temporarily stop the update, so you can keep KB4056892 at bay. The steps to do this include:

Installing the KB4073290 Cumulative update will help solve the problems with the KB4056892 update. However, if you have already installed KB4056892 update on your system, follow the steps below:

Another method that works to resolve the KB4056892 issue is to perform a Windows Recovery. This helps to resolve your computer to a previous working condition.

Video Guide: How To Make A Windows 10 Recovery Drive

Another method to prevent problems with the installation of KB4056892 update in Windows 10 is by performing a Windows 10 repair-upgrade. Use the media creation tool in order to create a USB Windows 10 installation media or ISO.

To understand more about what problems computer users have with installing KB4056892, we search through several tech support forums. In general, people wanted to know how to fix KB4056892, where to download KB4056892, and how to block KB4056892 update from installing.

A computer user said that he had some problems with the kb4056892 because his laptop kept freezing whenever he tried to install that specific Windows 10 update. He attempted to restart Windows 10, but the update couldn’t install properly no matter what he did. And Microsoft Support wasn’t very helpful in solving the matter.

Another poster points out that the kb4056892 is a fix for Intel memory leak and that you can block it for a while if it is causing problems. He adds that since a lot of users have issues with Windows 10 updates, Microsoft has introduced a way to block or hide problematic updates. The only thing you have to do is download another KB4056892 update and launch the program. It finds pending Windows 10 updates and allows you to choose which one to hide/postpone. The user warns that you should always download updates from the official Microsoft page. Otherwise, you might stumble upon a virus and infect your device. 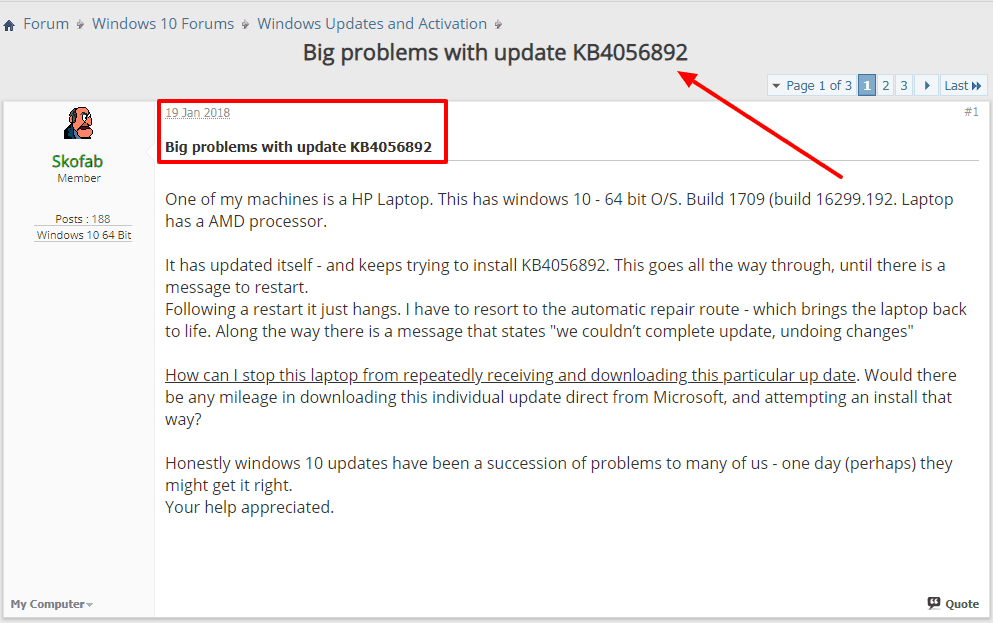 Another forum member says that if you’re having an issue with the KB4056892 update, you can reset the Windows with the help of an automatic script. He adds that you must run the script as an administrator. However, if you don’t want to bother with that, you could wait for the next update that would hopefully fix the problematic KB4056892.

A computer expert explains that you might have corrupted system files if you get error codes when installing KB4056892. He advises that you run the Windows Update Troubleshooter in addition to System File Checker to ensure that you don’t have any damaged files.

An individual comments that if the automatic update of KB4056892 fails, you should try to do a manual one and see if that will solve the problem. The user remarks that you can find the update in the Windows Update Center and that you have to click double on it to start the installing. However, a couple of other computer owners state that installing KB4056892 manually always fails and that you shouldn’t bother with it.

Another person suggests that you turn your third-party antivirus in case it’s causing a conflict with the KB4056892 update. In addition to this, you should check if your drivers are up-to-date and update if they are not.

A computer owner was very frustrated with the KB4056892 because the update was stuck in a loop and as a result, he couldn’t use his device. He also reported that the problem affected only AMD processor because he was able to install the update successful on an Intel Core laptop.

A poster shared that he has been trying to install KB4056892 for a few days with no success. His computer only got the update to 30% before restarting and freezing on the blue Windows icon. He adds that he started the Windows 10 Update Assistance, but it was not helpful at all. He asked the Microsoft community for advice, and they pointed out that the update was aimed at Intel memory and that was why it was bugging the other devices like those with AMD processors.

A forum member complains that he had to reboot his PC and use system restore to bring back the computer to a working condition because of the issues with the KB4056892. From what he read online, it is a common problem for many users who have an AMD processor. It seems that the KB4056892 conflicts with the AMD processor so it can’t boot properly after the installation of the update. He recommends that you skip that update and wait for the next one instead of trying to fix it.

The above fixes can help resolve the common issues that come after installing the KB4056892 update. If you do not want to use manual repair tips, you can opt to use automatic software to fix the error.