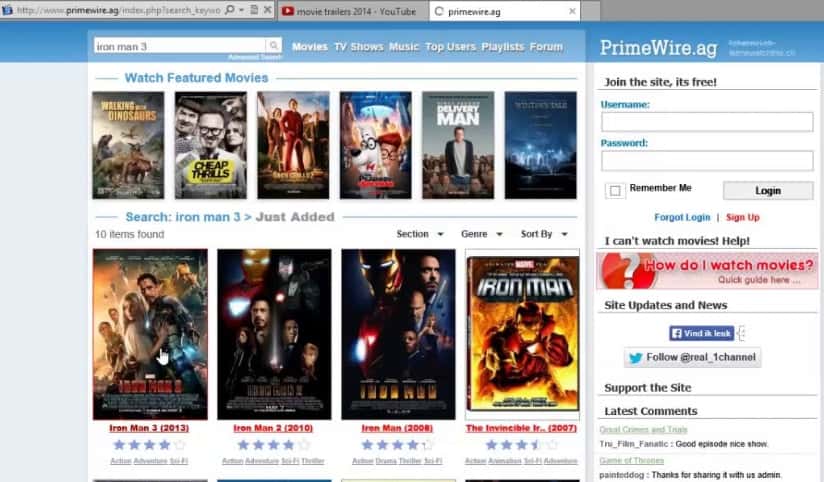 PrimeWire was (is?) a website that hosts pirated media, described frequently as a site where you can watch pretty much any movie or TV series you can think of for free.

There is a lot of confusion about what happened to PrimeWire.

According to this Reddit thread, a user who inspected the code of the website when it was still online said that it was suddenly set to redirect 100% of the time into an ad:

“gohere.php is a url bouncer that is set to either forward you to a video or pop up an ad”: 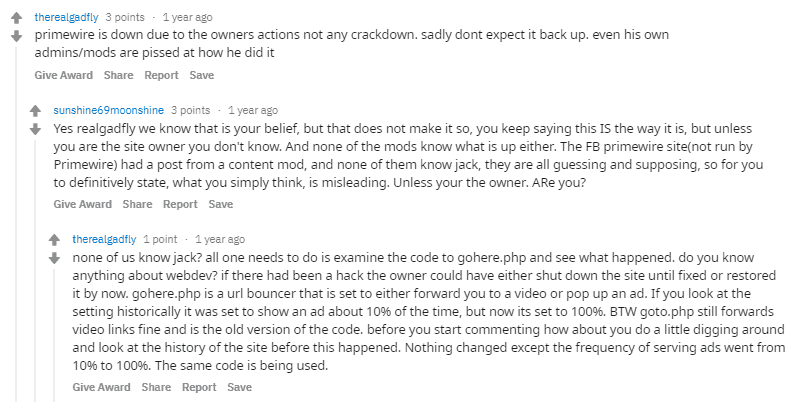 This Reddit user also says that the site shut down wasn’t on account of a hack or some sort of copyright takedown.

Over on Twitter, in a response to a treat that has since been deleted, someone claimed to be part of the original moderator team and said they “decided to shutdown primewire…due to the owner and his greed”:

https://t.co/A9hpf4PZJo OR 123MOVIES are both decent.
You are correct; sort of. It was the mods that banded together and did this.
Myself, Johnnie Rotten, Mags CR, and two others that want to remain nameless decided to shutdown primewire. It was due to the owner and his greed.

In another Reddit thread, one user wondered how these websites are able to stay up so long and why they aren’t more quickly shut down by the government”

That is why you see a lot of weird top level domain extensions like “.ag”. The Reddit user says that it refers to Antigua and Barbuda which doesn’t enforce copyright laws as diligently as America does, the user claims.

One of the original URL is of the site was this one:

And if you visit it now it redirects to

At the time of this writing 2019. That particular site claims that “Primewire is back and better than ever! We’re working on rebuilding the database, so have patience.”

How It Used To Work

In our experience, what happens is that once these sites that either host content they don’t have a copyright for or link to places to watch this content, become popular they get taken down.

Sometimes the whole website is taken down or sometimes search engines deindex it.

After it is taken down, a bunch of sites that look similar to it pop up to capitalize on all of the search traffic defunct site inspired.

For example, the search term “PrimeWire” easily gets six-figure searches a month- so clone websites are eager to tap into this valuable traffic stream for ad revenue.

There’s always a lot of rumors and speculation when the sites get removed. As the Reddit thread suggests, it seems like in this instance for whatever reason the site was taken down or heavily modified so that anyone who visited it would be redirected to an advertisement.

Site owners do this because it’s a way to still make money serving ads even if the actual site has been fatally compromised and no longer serves its original purpose.

There are some other streaming Alternatives you can check out. While PrimeWire was certainly an incredibly popular option while it’s still worked oh, it’s the nature of the Beast that the streaming site landscape morphs and evolved over time.

Finding streaming content online can be challenging and unethical if you don’t go through a paid service that has legitimate distribution rights for the media.

Streaming services like Netflix, Hulu and Amazon Prime are relatively inexpensive and they do provide a vast amount of content.

In our experience, often times users are looking to find access to media and movies that have recently been released and aren’t yet available, at least for free, on legitimate streaming sites.

For example, at the time of this writing, Marvel has recently released seemingly one of its most popular movies to date: Avengers: Endgame.

Streaming movies sites get tons of traffic by illegally hosting or linking two websites that host this content. it’s definitely a black hat way to get a lot of traffic and ad revenue.

There are a lot of people that advocate for all media being free. We’ve seen this argument routinely on Reddit and other community chat forums.

What’s lost in this conversation is that without a profit incentive, creators aren’t incentivized to create the content that users want to see.

Granted, and a lot of cases, the copyrighted content that is being streamed comes from megalith corporations.

However, even though they are large, multi-million and even multi-billion-dollar corporate entities, the effect of pirated media and illegal streaming sites is felt on their bottom line.

Traditionally, Reddit users and other people searching out streaming sites appreciate the negative impact copyrighted content has on the original creator. But when it comes to a large corporate entity, users aren’t as sympathetic and don’t think that their actions have any sort of impact on the creative motivations of the entertainment industry.

For example, often times people on Reddit will repost an Instagram image without crediting the author. It’s often true that in the comments section Redditors chime in to chastise the original poster for not providing the credit the creator deserves.

It’s similar with streaming sites, they are depriving the, albeit larger, creator legitimate credit in the form of income.

All that said, this debate is not going to be resolved anytime soon. These websites that stream the content will continually pop up, they will be smacked down by copyright notices, look-alike sites will emerge and everyone will be confused about what happened and which are legitimate 2.0 versions of the initial site that was removed.

If you are looking to find the original PrimeWire, all of our research suggests that it was taken down. You can review the links we posted to Reddit and Twitter which seemed to suggest that the site was removed after some internal dispute with whoever actually owned it.

As we have seen, there are many duplicate and clone websites masquerading as the 2.0 version of the original, but it’s not likely that those are the same exact sites.

Our best advice is to use a paid service and consider purchasing tickets for the movies you want to see in the theater to encourage the film and TV-series creators to keep creating the content you enjoy.