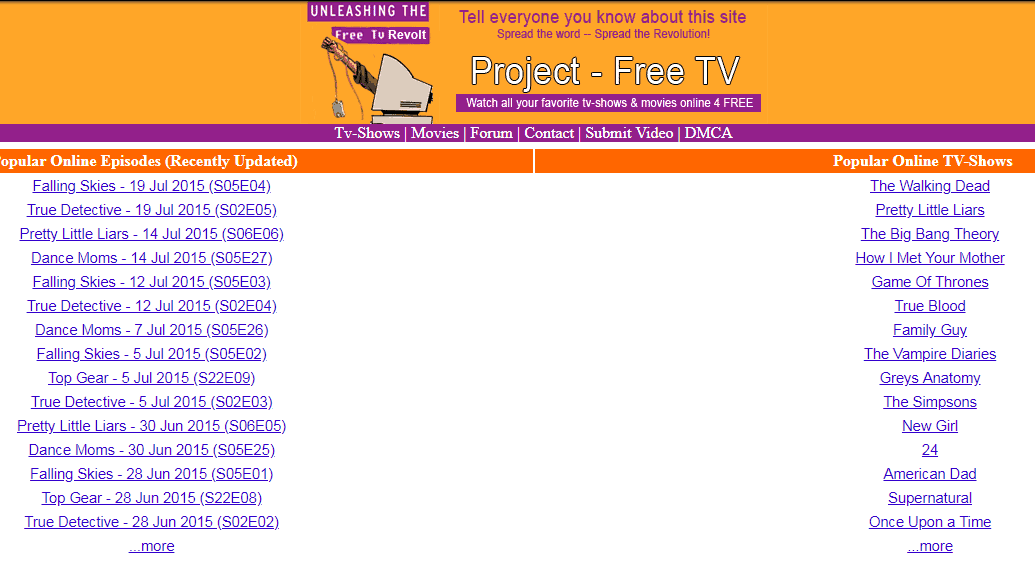 If you’re having trouble finding ProjectFreeTV, it’s not an error…

Project Free TV was (is?) a notorious TV show-streaming website. It suddenly vanished from the internet on the 24th of July 2017, but many similar websites (with similar domain names) have cropped up (Source).

If you visit this forum on Reddit dedicated to ProjectFreeTV, there are a ton of users saying that there is a new version of it up and running. But there’s a lot of confusion about whether these sites are actually from the same team as the original ProjectFreeTV.

Over on that forum, one of the pinned posts is this one, from several years ago:

The user says that the site’s Facebook account posted a link to their new domain. If you click the link, it actually redirects to a site called https://www1.swatchseries.to.

This is about as official a resource we can find regarding the current status of Project Free TV. The International Business Times reporter who wrote about the initial shutdown says that they reached out for comment to the original site said that they never heard back. So it’s really unclear if there is an official alternative or rebranded alternative at this point.

Why So Much Confusion?

What happens with illegal streaming sites like these is that once they get really big and popular, they get taken down by the companies whose content they are stealing. Sometimes the site reappears under a different domain name. Sometimes they don’t.

What is going on with Project Free TV? from r/projectfreetv

However, a lot of other webmasters capitalize on all the people Googling for the site by creating a ‘fake’ clone of the original site by including Project Free TV, or a variant, in the domain name.

Another Redditor posted a pretty accurate summation of the situation:

Google ranks these sites high in the search results page, people begin linking to them on places like Reddit, under the false assumption that the site is a relaunched version of the original.

It usually isn’t- plus if a site has been taken down for DMCA/copyright violations, it doesn’t seem logical that the original site owners would immediately recreate it under the same name and risk the renewed wrath of a corporate legal team.

Currently, there are 2 sites ranking for the search term Project Free TV (https://projectfreetv.xyz and http://projectfree.tv). We can’t say that they are legit.

back in my day we had to projectfreetv and chill

We don’t endorse piracy, but if you’re intent on finding the original site, if it exists, try searching for it on Bing- it might still be indexed at this point. If you find a site you want to use, make sure you’re using an ad blocker, never hand over payment details, or even your email- many of these sites are incredibly unscrupulous with how they leverage your information.

Below an Instagrammer captured the pure bliss of free streaming entertainment- looks like she was watching Project Free TV at work:

Project Free TV is (was?) a website that allows users to stream live television shows at home from their electronic devices without paying for any specific service.

The streaming site was initially removed from the internet back on July 24th, causing some people to feel upset about not having the opportunity to watch some of their favorite television shows. However, the site is now back on the internet and is running smoothly while providing users with access to hundreds of their favorite shows.

It's happening!! Thank you #projectfreetv pic.twitter.com/h5cBpff3pV

Most of the people who regularly relied on the website to watch television shows assumed that it was gone for good. When visiting the original website URL, they would immediately see a blank page that simply had a goodbye message displayed on it without any further information.

While most people assumed that it was gone, a simple Google search of the words, “Project Free TV,” will show you that there is a new site you can visit to watch your shows. The site is ProjectFreeTV.so.

What Is Project Free TV?

The Project Free TV service makes it possible for people to find and watch their favorite television shows online without paying a cable provider to watch these shows from their television. There are links on the website that will take you to sites that are playing some of the most popular shows on all the different channels people tend to watch.

It even includes a detailed schedule that will show you exactly when your shows are due to come on.

If you want to use the site to watch free television, you can go on the website, begin looking for a specific program, and then click on the link that will take you to a site where you can easily watch the show without paying a single cent. The site has been around for quite some time, providing users with a way to watch for free when they are on a budget or simply looking to avoid those costly cable bills.

Unfortunately, the site is blocked in the UK and has been for the past six years because of copyright claims.

What Made Them Change the Name of Their Domain?

No one is sure why the providers of this convenient service decided to change the name of their domain.

Many people who use Reddit and use this service have been communicating with one another about some of the other alternatives they can use to start watching their favorite movies and shows for free. Some sites that provide these services offer updates when they are going down for maintenance or switching domains, but Project Free TV has not provided any of its users with information on what happened.

As a way to avoid getting into any legal trouble, Project Free TV does include a page on its website that is all about protecting copyrighted content. The creators of the site mention that they do not monitor what gets uploaded on their site by the people who use it, but they claim that they will take something down if a request is made to do so based on copyright claims.