Generally a harmless process, RAVBg64.exe is the main process behind the Realtek Audio Driver.

The RAVBg64.exe has a .exe file extension which tells you that it is an executable file.

This type of file contains step-by-step instructions that a computer executes to perform a task such as printing a document, playing music and more.

Executable files are requisites for software applications. However, because they are useful and everywhere, .exe files are used to deliver virus or malware. Often, viruses are named the same to make them difficult to track down. 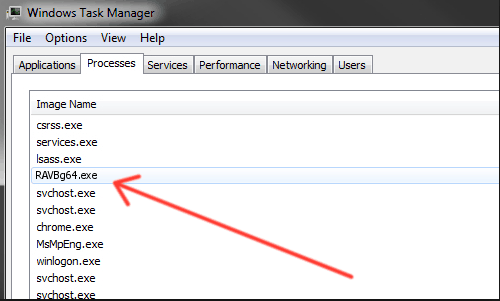 In other words, while RAVBg64.exe is a useful file, it can be a virus or malware in disguise that is causing troubles to your system.

Before we get too complicated, let’s get to know RAVBg64.exe better and learn its relationship to the problems you encountered.

RAVBg64.exe is not an essential Windows file. That means it does not really stop Windows from working.

However, it is an important file for audio processing when you use audio and video software. It ensures that communication apps and audio drivers perform properly. Due to this, while it may affect other apps and CPU usage, it is not recommended to remove RAVBg64.exe unless it is a virus.

Since it’s used in communication apps and audio drivers connection, there have been reports of RAVBg64 messing up with Skype.

This section will show you three ways of fixing errors which are related to RAVBg64. The first method aims to make sure whether this file in your computer is not a virus or malware.

The next methods are meant to address issues related to high CPU usage and Skype which are among the most common problems.

If you are suspicious of the RAVBg64.exe files in your computer, here’s a suggestion by the moderators at the Microsoft Community forum to make sure they are not threats:

You can also check the address of the RAVBg64 file. It should always be in C:\Program Files\Realtek\Audio\HDA or at C:\Windows\System32\DriverStore. Otherwise, they are threats to your system.

To do a cleanup of these threats, run a virus and malware scan. Uploading the file to virustotal.com has been recommended in the forum. It checks the files real-time for free with the help of multiple antivirus tools.

This fix is used to resolve issues with Skype. Usually, the error message says, “Skype wants to use RAVBg64.exe.” While it does not stop you from using Skype and is not harmful, the popup messages can be annoying.

There are reports that said this is caused by a bug in the Skype versions that are at least 7.22.0.109. Skype has released a fix which does not work for some users. Over at the Microsoft Community forum, they suggest resetting the Skype app this way:

If it still doesn’t work, try installing the latest version of Skype or reinstalling it.

This easy fix seeks to resolve RAVBg64.exe-related issues which may have caused it to hog system resources. Once you have made sure that your RAVBg64 file is not a virus or malware, updating your audio drivers is recommended. Here’s a quick guide as suggested by a user at Quora:

You should also try disabling the Realtek Audio Driver by following these steps:

In this video, the PCRisk vlogger demonstrates how to reduce CPU usage by the RAVBg64.exe process:

It seemed the primary theme with this executable file process regards issues with Skype, CPU usage, runtime errors, whether it’s a virus, what to do if there are multiple instances running and where to download it.

Over on File.net, they say this Realtek High Definition Audio Driver, by Realtek Semiconductor, helps power the Realtek Audio Driver. The most common reported size on Windows 10/8/7/XP is 1,321,688 bytes.

One user said that it is indispensable software for your Windows audio drivers that is typically installed by default on most machines.

Another computer user said that it is not a harmful file and provides an important audio processing service if you are listening or watching media.

Over in the Microsoft answers support community, one person was troubled by multiple instances of it running. He said that he was perusing his Task Manager when he discovered that he had five instances of Ravbg64.exe Running simultaneously.

The top voted solution came from a volunteer moderator who recommended installing the newest available drivers to ensure that the existing ones aren’t corrupted or infected.

In that same thread, another user was experiencing the same problem. He said it occurred whenever he connected his computer and television with a Sony Soundbar using an HDMI.

In a separate Microsoft support community thread, another person was concerned because the executable process was requesting access to Skype. he was looking for a solution to this nagging issue because he didn’t want it to initiate at Skype startup.

He was receiving this Windows alert:

“RAVBg64.exe is requesting access to Skype. Only allow access to programs downloaded from a trusted source as they will be able to use information such as your Skype contacts and messages.”

A moderator responded that this Realtek process helps connect your audio drivers with communication applications like Skype.

They recommended allowing access, which should prevent the pop-up from appearing in the future. Another person decided to deny access but then had difficulty subsequently running Skype. The Microsoft moderator suggested installing Skype and then reinstalling.

As with other issues related to executable files, it is important to check that the RAVBg64.exe file on your computer is not a virus or malware. After exposing the file extensions of known file types, disguised malware may appear like this: filename.docx.exe. Initially, you would have thought this was a normal document file, but a few tweaks will reveal its true nature.

Issues related to RAVBg64.exe have known concerns. Thus, there are a lot of resources that can help you in resolving them.