In this post, we provide 3 fixes for the TypeError: ‘NoneType’ object is not iterable Error.

The “TypeError: ‘NoneType’ object is not iterable” is an error message in Python programming language that when an operation or a function is applied to an object of inappropriate type, Python will throw out an error and stops the program from executing. This error message has two parts which are broken down into the following:

I'm attempting to create a user generated list of colors. However I get the following error:

TypeError: 'NoneType' object is not iterable

Some people even use the error as a joke!

I'm going to enumerate all the things I like about IE:

TypeError: 'NoneType' object is not iterable

The YouTuber walks you through how to deal with the error:

What is TypeError: ‘NoneType’ object is not iterable?

In Python, the error message “TypeError: ‘NoneType’ object is not iterable” is caused by iterating or using loops on a None or null variable. Basically, in common practice, it is not allowed to loop through a non-array data. Take a look at this example code:

In line 2, Python recognizes that we are trying to use a loop on the variable fruits. It will immediately throw the “TypeError: ‘NoneType’ object is not iterable” message because “fruits” is None or a null data. We cannot possibly loop through None or null; it is like counting how many books you have but actually, you do not have any declared.

Here is a basic example of how to properly iterate an array:

As you can see in line 1, we are declaring the variable fruits as an array of strings (fruits). This will give us the output without errors below because this time we are iterating an array and not a None.

How to Fix the ‘TypeError: ‘NoneType’ object is not iterable’ Error

Sometimes, it is inevitable that variables or functions return None or null, and we accidentally force to loop through them causing this error to be thrown. However, there are multiple ways to fix this type of error by using the following methods:

The isinstance() function will check if the object (first argument) is an instance or a subclass of classinfo class (second argument). We can use this built-in function to check if we should or we should not loop through a variable. Take a look at this code example:

To avoid getting the error, you can follow these steps using the isinstance() built-in function:

Now we can proceed to the next code execution and fully avoid the ‘TypeError: ‘NoneType’ object is not iterable’ error message. The Python isinstance() built-in function is used in so many ways not just for this type of error handling.

In Python, we can handle errors and exceptions like the ‘TypeError’ error using the try except statement. Follow these steps for exception handling:

We have avoided the error again using Python’s exception handling.

This time, follow these steps if you prefer to use the type() built-in function:

Look at the comparison of the type() and isintance function in Python. 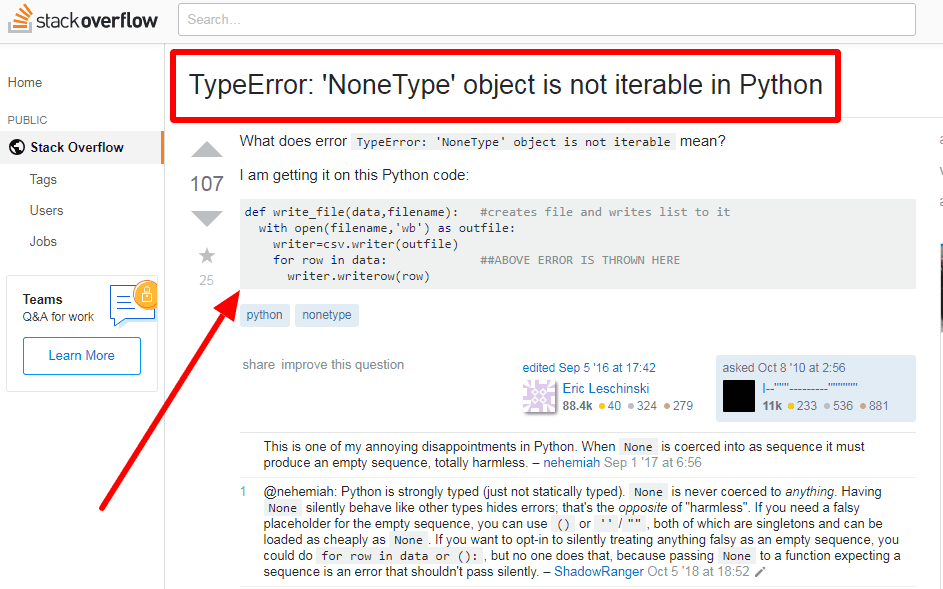 A Python novice started working on a code for a school project, and he couldn’t figure out why he was getting the TypeError: ‘NoneType’ object is not iterable.

A poster explains that NoneType is a type of None object or in other words, an object which has no value.

Another computer expert said that making a typing mistake somewhere in the code might result in a NoneType object is not iterable. He advises that you check the spelling carefully to make sure that you’re doing everything as suggested by the Python Style Guide.

A person remarks that you might get a TypeError: ‘NoneType’ object is not iterable due to many reasons. However, one of the most common ones that new Python users do is that they iterate on numbers, while they should iterate on collections. To fix the issue, he says that you have to use one of these codes: for i in (number): or for i in ‘number’: and that you have to recheck all lines of code carefully and change it appropriately.

Another individual says that if you continue to get a NoneType error, you might have forgotten something as simple as quotation marks somewhere in a list you’re trying to return. So, he advises that you go over the code to find the mistake. The correct version should look similar to this – [‘word’, ‘word’, ‘word’], otherwise you’ll keep getting the same mistake because it can’t find the variable.

ALSO READ:  6 Fixes For The Your Connection Is Not Private Error [Solved]

A computer user mentioned that he was trying to write a code to round-up grades, but he was getting a NoneType error in Python 3.x. He reached out the Python community for help, and they explained to him that his mistake was a simple one. The user had used “print” instead of “return,” and as a result, his function didn’t have anything to return.

Another person commented that TypeError: NoneType object is not iterable might be the result of a return statement indented incorrectly.

A forum poster shared that he was having some problems with matplotlib in Python 3.7.0.

A forum member observed that he had checked his variables and that they were not None Type and that his program was running correctly on the first time. However, when he attempted to run it a second time, he kept getting NoneType object error. Other members of the Python community explained to him that he had problems with the logic in his code and that he hadn’t explicitly set a return.

To avoid getting the error ‘TypeError: ‘NoneType’ object is not iterable’, make sure that you have all the conditions in place that will return the data that you need. Do not use loops on a None or null variable as it will return this error. Basically, Python will iterate an array when you correctly declare the strings to be reported back.

As you progress your programming experience, you will surely encounter hundreds, if not thousands, of this kind of error. You can predict that a given variable is not an array to be iterated or a function may return None so you could use the fixes given above. This error is common when you are just starting to write code. But, through time, dedication, and patience you will get used to catching and preventing this type of error as you build your apps and software.