A number of Windows 10 users report experiencing a CMD popup each time they start their computer.

Since the popup only lasts briefly, those who have experienced it have been confused as to what it is and whether it’s a legitimate system process or a malware.

If you experienced the same thing, then you might have been confused too. Fortunately, this particular executable file is not a virus, but it may cause some issues on your system.

In this article, we’ll talk about what Usoclient.exe is and share with you some tips on how you can fix any issues related to the Usoclient.exe popup.

As mentioned earlier, Update Session Orchestrator is not a virus.

It’s a legitimate file which is part of Windows Update which is used for automatically checking any updates on your computer.

It’s short for Update Session Orchestrator and is basically the replacement for the Windows Update Agent on the Windows 10 OS (Source).

Specifically, this executable’s main purpose is to run tasks which are responsible for installing, scanning, or resuming Windows updates. It has pretty much the same tasks as its predecessor. 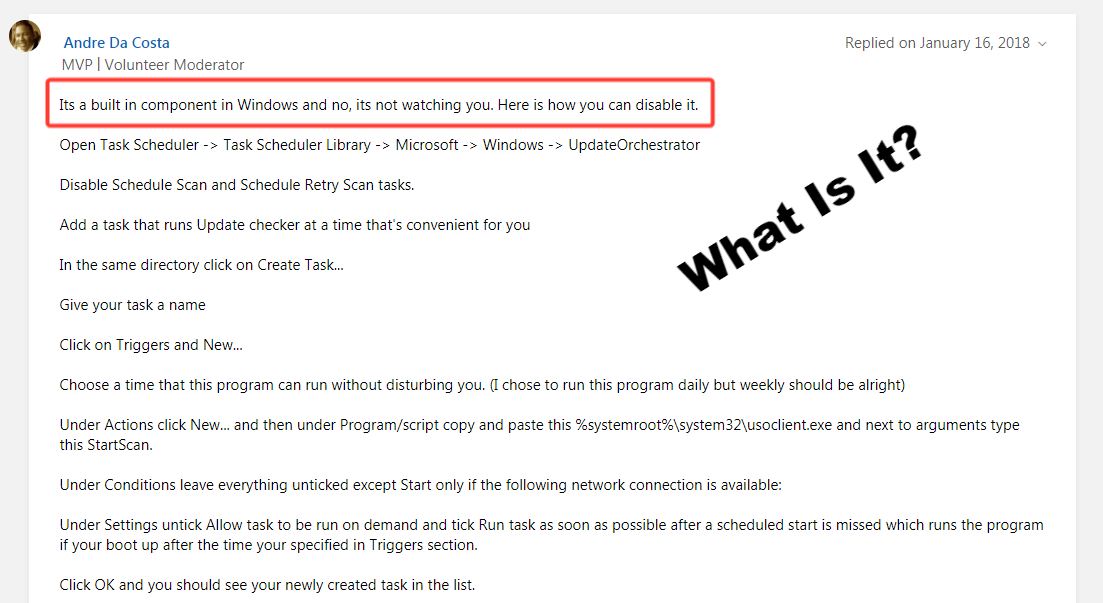 So far, there have been no records of the program posing a security threat to Windows 10 systems. However, certain malware programs can pose themselves as a system file and take on the same name as that of the original to avoid any security scans.

Fortunately, you can confirm it by finding out where the Usoclient.exe file is located. To do so, simply press Ctrl + Shift + Esc at the same time. In the Processes section, look for usoclient.exe. Afterward, right click on the file and choose Open File Location.

If it’s located in the C:/Windows/System32/ folder, then it’s a legitimate file. However, if it’s located somewhere else, then it’s almost certainly a virus. You’ll have to use an antivirus or malware remover to clean your system of any infection.

How to Fix Usoclient.Exe Errors

Since Update Session Orchestrator is a legitimate Windows file, it’s not advised to delete it from your system as it can only result in weird behaviors.

However, considering that it’s a system file, your OS will most likely create a replacement at the next startup if ever you accidentally deleted the file.

That aside, here are some of the quick fixes for most of the issues related to Usoclient.exe:

A contributor at the Microsoft Community suggested this quick Usoclient.exe popup fix whenever that black CMD window appears randomly when booting your computer. This particular fix is really easy to do, but it may take a few minutes to complete depending on your system, especially if there are lots of corrupted system files. To do so, simply follow these steps:

Most of the time, this quick fix is all you need to solve the issue. However, there are some issues when you need to do some more technical solutions.

2nd Fix (Use the DISM Tool)

If the first fix wasn’t able to detect any corrupted files in your system but the error is still there, you’ll have to follow this method which is suggested by a user at Tom’s Hardware. Here’s how:

If none of the above fixes worked for you, then perhaps the Windows Troubleshooter can.

However, this method is only effective if the Usoclient.exe popup is always on your screen. This fix provided by Appuals includes the following fixes:

There are several methods you can use to disable the Usoclient.exe process – one of which is by using the Registry Editor. This fix, which is given by Reviewed by Pro, details how you can disable the process by tweaking your registry.

Keep in mind that meddling with the registry may lead to some serious damage to your system. It is, therefore, advised to create a backup first. Click this link for more information.

To disable Usoclient.exe via the registry, simply follow these steps:

Another method to disable the Usoclient.exe process is by using the Group Policy Editor as outlined by The Windows Club. Here’s how:

A computer owner shares that he has Windows 10 PC and that every time he starts the device he gets a command prompt windows saying usoclient.exe. He is wondering if it’s a virus, even though he has scanned the laptop several times with no malware or viruses detected. 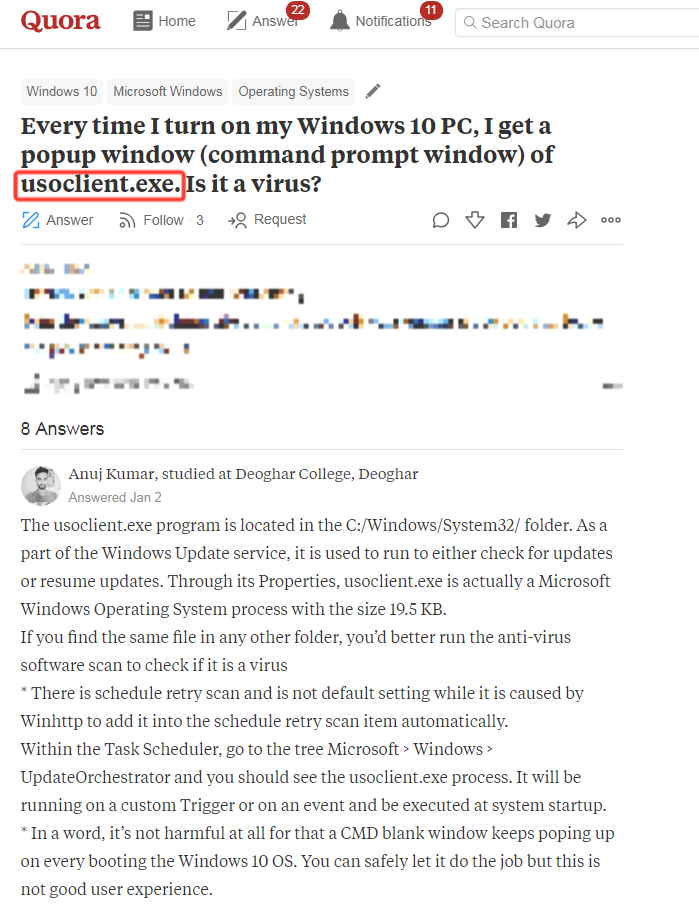 Another individual explains that usoclient.exe is part of Windows Update Service and that it’s usually located in the C:/Windows/System32/ folder. He says that its functions are to check for updates and resumes them when needed. However, he warns that if the exe file is located in another folder, it might be malware, and you should scan it with your antivirus program.

A person comments that usoclient.exe is a Windows System Operating process and that its size is usually around 19.5 KB. He adds that it’s not harmful to your operating system and that you shouldn’t worry if you see it when you boot your device. He also mentions that you can find the process by opening the Task Manager and that usoclient.exe is only associated with Windows 10.

Another computer user stated that he got an error message related to usoclient.exe when he started his device. He contacted Microsoft support, which explained that the error might be due to corrupted or damaged files and that he should start the System File check to repair them.

A forum member mentions that you can disable usoclient.exe by starting the command prompt and typing MSConfig. From there you can disable it from the start-up programs. He also says that if the usoclient.exe command window appears too often, you might have issues with your automatic updates. In such a case, you should update your system manually to make sure that everything is up-to-date and that you’re not vulnerable to hacker attacks.

ALSO READ:  What is Codemeter? | Plus 6 Fixes For Common Errors

Another computer owner complained that he started to get a random black usoclient.exe windows and that he wasn’t sure why it was happening because he was new to Windows 10. Support advised him to start the device in Safe mode to check if the problem would persist.

A forum poster reported that he had been getting the black command prompt for at least and month and was wondering what was going on with his system. He knew that the usoclient.exe was related to Windows Update, but he had installed all his updates and couldn’t understand why the pop-up window continued to appear. The computer user checked if the usoclient.exe was related to an installed program, but it wasn’t.

Another individual explains that usoclient.exe is a system process and that it’s not a good idea to try to get rid of it because the update is not going to work properly anymore. He adds that you might experience a problem with usoclient.exe if it’s scheduled to run every time you boot the computer. That’s not the usual setting for the program, so you should check the settings for Windows Update. The user stated that you can stop the usoclient by disabling it from the Task Scheduler. He also mentions that you can see the pop-up windows if your operating system is installing new updates.

A poster also states that it’s not normal to see the usoclient.exe pop windows often. The computer user says that he has a new computer in work and after a clean Windows install he doesn’t see the usoclient.exe command window. However, he still observes it on his computer at home. He ran several scans because he believed that an outside program was setting it off, but didn’t find the source. The user was convinced that a malicious program might be disguising as usoclient.exe because when he started the task manager, the pop-up would disappear.

A forum poster was very disappointed that Microsoft support couldn’t provide an explanation why usoclient.exe was showing so much. He mentioned that he had Windows 10 for more than six months and that the problem appeared recently. It turned out that he had to update some old drivers and the problem went away.

Another person confirms that usoclient.exe is not related to signing in with your Microsoft account and that you can get rid of it by disabling Windows Update. However, you’d have to install any new updates manually.

Fortunately, any issue related to Usoclient.exe is easy to fix as long as it’s not a virus or malware in disguise. The fixes above are recommended so you can no longer experience the popup bug which can be quite annoying if left unattended.