In this post, we unearthed 7 fixes for the Wacom Tablet Driver Not Found error- scroll down to get started!

Have you ever seen the error message “Tablet Driver Not Found” when you try to pull out data from your Wacom tablet?

It’s actually a pretty common problem that a lot of users experience if they have a graphics tablet. It may be a pretty annoying problem, but it’s something that’s actually not that hard to fix.

In this article, we’re going to cover all of the possible fixes you can try.

What is the Tablet Driver Not Found Error?

When you see the error message “Tablet Driver Not Found”, the first thing you’d want to know is its cause.

When you see this message, it means the driver is responsible for the tablet not working. The device driver cannot seem to connect the software to the hardware because the right drivers can’t be detected.

The cause is either a corrupted driver or simply missing drivers. These fixes will be able to address the problem:

How to Fix Tablet Driver Issues

To fix the issue, we have prepared the following quick and easy-to-follow fixes you can try. 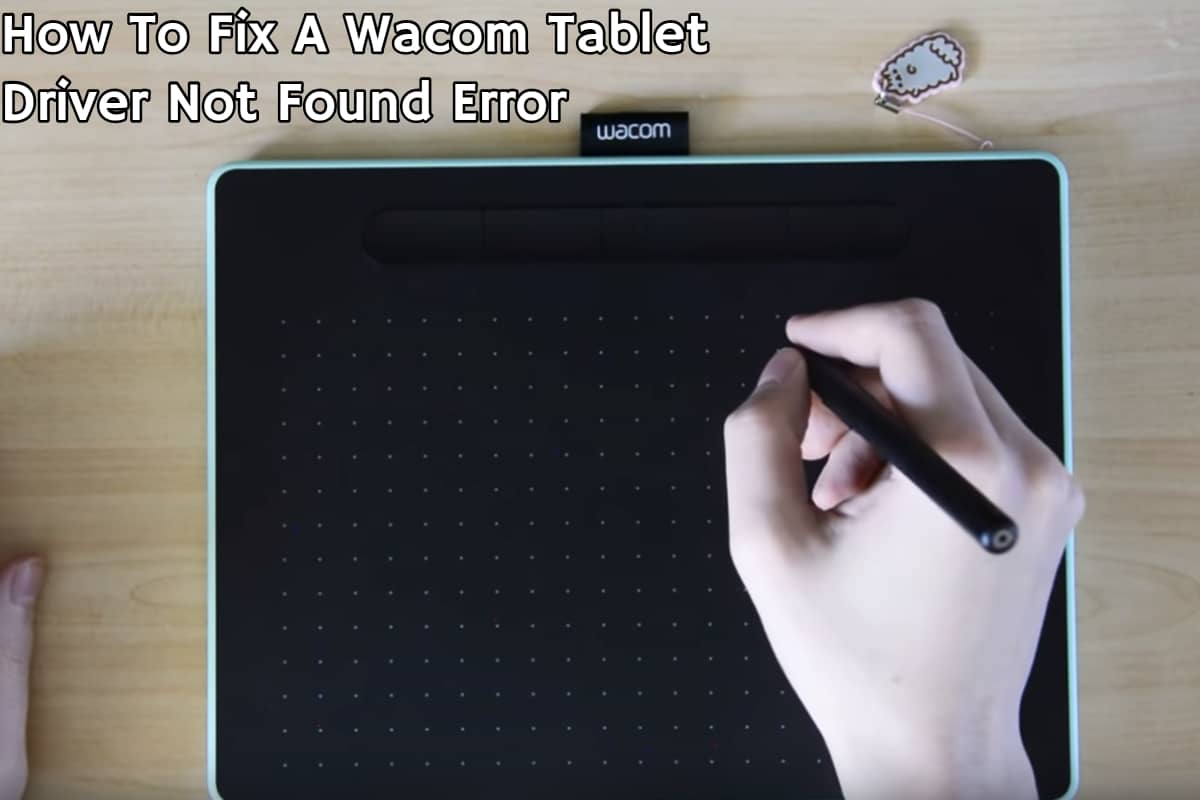 Of course, the first thing that you’ll want to do is check if the tablet is properly attached to the port. While this may seem so simple and self-explanatory, a lot of people miss out this very simple issue. Just before you try anything else, just perform these steps as recommended by Appuals:

If any of those can’t fix the problem, then it is most definitely a software problem. That said, we can get started on the next few software fixes.

The simplest fix to addressing tablet not working issues is to restart the Wacom services. By doing this, you’ll be restarting the entire program and refreshing all of its data. This usually works for the very simple driver problems. Appuals suggests you follow these steps:

Another cause would be missing or corrupted drivers. DriverEasy recommends that you follow these steps to fix the issue:

If that still doesn’t work, then here is another fix that can work as per recommendation from Appuals:

5th Fix: Same as the Above Fix but with a Different Method

Appuals offers another recommendation on uninstalling and reinstalling the software. Here are the steps to do that:

ALSO READ:  What Is A Memory Management Error For Windows 10?

6th Fix: Roll Back Your Drivers

Aside from these fixes, PC Risk blog also offers some advice on how to roll back the drivers. This would usually work so it pays to try it out:

Video Guide: How to Roll Back a Driver Update in Windows [Tutorial]

7th Fix: Enter a Command in the Command Prompt

The last fix is to use CMD. However, you may want to use this as a last resort because it’s a bit complicated. Before you try this method, try all of the other above methods first. If they don’t work, then try this:

How to Set Up and Use a Wacom Tablet

The PHLEARN YouTube channel did a pretty comprehensive viedo review of the tablet, saying “Today we show you how to set up a Wacom pen tablet to edit faster and more efficiently in Photoshop. Not an ad, just tips from this tablet-user’s personal workflow!”

To understand better about what problems users had with tablet driver not found, we took a look through several tech forum threads (this one and this one). 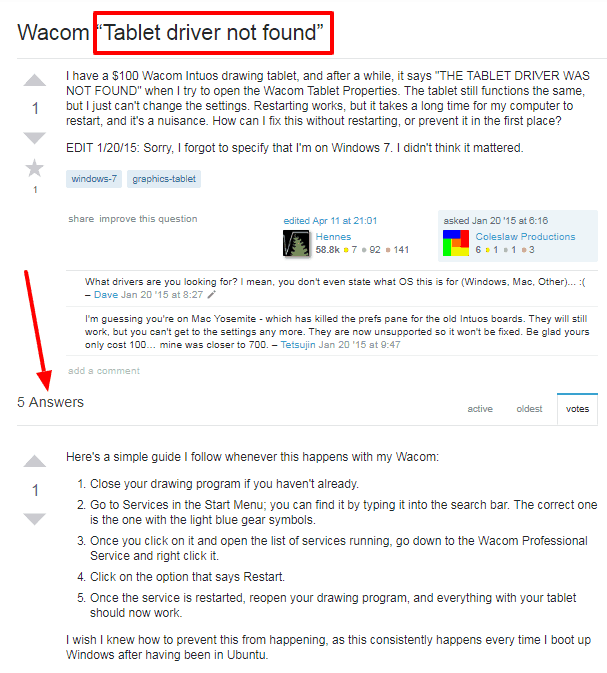 A person shared that he had a Wacom drawing tablet and that he was constantly getting the message “tablet driver not found” while working. He mentioned that the tablet was functioning normally with the exception that he couldn’t change the settings. The user added that restarting worked but his device was slow to restart, and he was looking for a permanent solution to the problem.

Another forum poster said that he dealt with the tablet driver not found error by restarting Wacom. He added that you could find it under “Services.” However, he added that you should close the drawing program before restarting it. After the restart, it should be back to normal.

An individual mentioned that he wasn’t happy that he had to constantly to restart Wacom Professional Service to fix the tablet driver issue. He said that nothing he found online helped him and that he was at his wits ends. The user added that he thought the Microsoft community would be useful, but they weren’t.

A forum poster reported that one of the ways to fix the driver not found was to change the startup type of the tablet. You could do that by going to “Services” and then switching from “Automatic” to “Manual.” Then you restart the tablet, and everything should be working smoothly. However, he pointed out that you’d have to start Wacom manually every time you turn on the computer.

Another computer owner notes that you can end the Wacom process from the Task Manager. After that, he usually unplugs the tablet and plugs it back in, and the problem is solved. The user says that he is happy that he found that way to deal with the issue without restarting the computer.

A person mentioned that he experienced the same problem for a couple of weeks, and finally, he decided to try something different. He downloaded the WacomTablet_6.3.15-2 and after that everything was back the way it was. 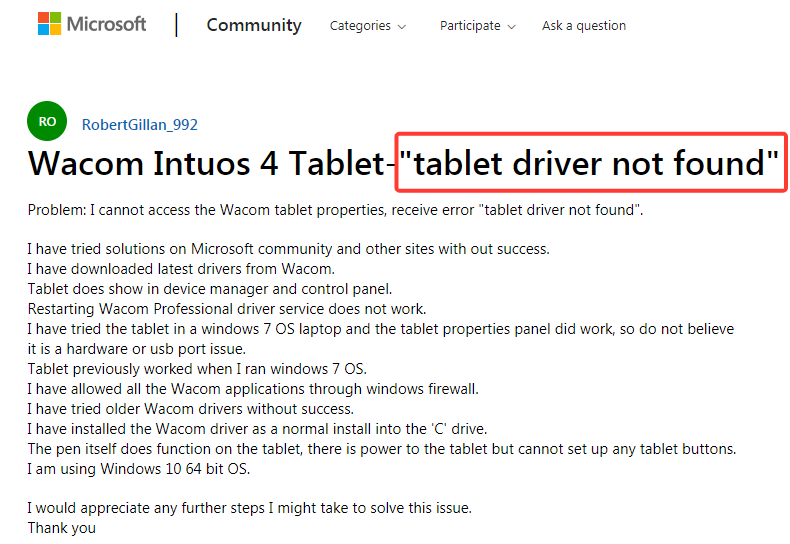 A forum member shared that he had been using a Wacom Tablet Intuos 4 for a couple of years and that he had never had problems with it while he was running Windows 7 and Windows 8.

Another individual said that he also had problems with Wacom Tablet Intuos and Windows 10. All his drivers were up-to-date, but the tablet wasn’t functioning normally.

A forum poster explained that the driver not found issue might be the result of a driver that hadn’t been properly installed. He said that the easiest way to resolve the problem would be to run the Windows Update Troubleshooter or contact the driver’s manufacturer.

Another computer owner observed that his tablet worked fine while he was running Windows 7 and that all his troubles began when he switched to Windows 10.

A person said that he noticed that his pen pressure wasn’t functioning even though the pen was tracking normally.

Basically, those are some of the fixes that will be able to address the problem. What we recommend you is to try these fixes in chronological order. Start with the hardware and see if everything is plugged in properly. If everything is fine, go on to the next fixes. Try them one by one and see which one works. Try the last fix as the last resort if none of the previously mentioned fixes cut it.

If nothing works, then there is most likely a problem already with your device that can’t be fixed by conventional means.

In such a case, you may already need to bring your device back to the store where you bought it and have them take a look at it. Once they examine the device, their technical support will be able to determine why your device is acting that way. From there, they can give their inputs and solutions to fix the issue.

However, most of the problems are caused by simple issues and can usually be fixed by applying some of the recommended fixes stated above. Just try all of them and see which one works for you.