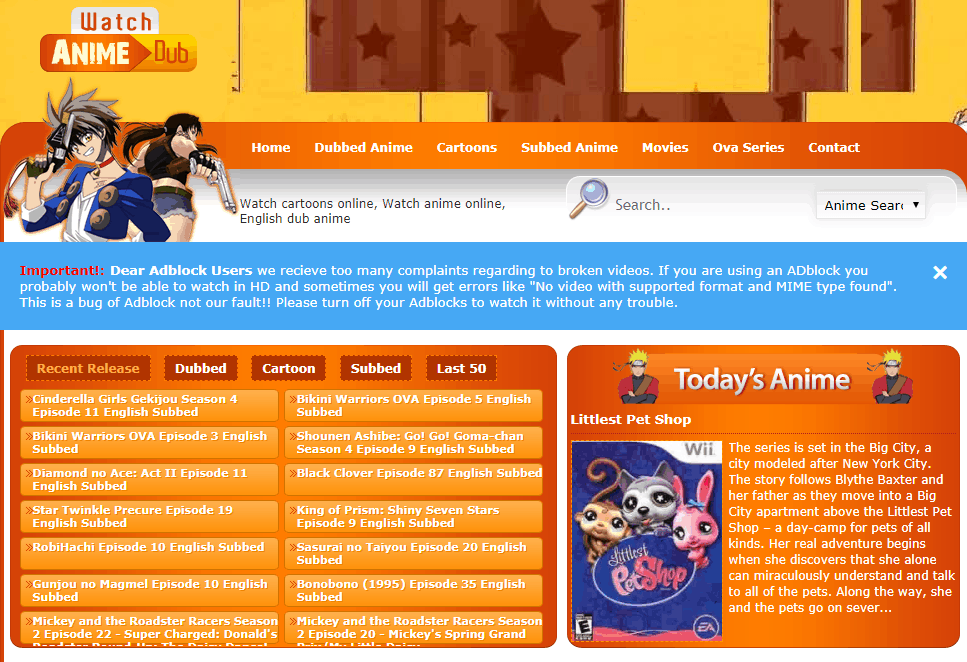 In this post, we’ll discuss the WatchCartoonsOnline website- how to find the real one in a sea of spammy fakes. Plus over 26 alternatives if you’re looking for something different!

The internet is chock full of free streaming sites for modern and classic cartoons.

One of the most reliable sources for cartoons and anime is watchcartoonsonline, but the status of the site has been tumultuous.

Many of these media repositories exist in a legal grey area because they often violate copyright laws surrounding their content, however they subsist thanks to alternative domains and foreign servers.

In the sections below, we’ll dig deeper into this website and its current availability as a streaming choice.

Finding The Real One

One trick to finding the right site is to use Bing to search for it or run the site name through Reddit to get feedback on which of the sites is actually the real one and not a spammy imposter.

Researching Reddit, at the time of this writing in June 2019, the .io version of the site does seem to be legit- but this could change!

What happened to watchcartoononline? from Addons4Kodi

Another user responded, saying that they “Used to be a die hard watch cartoons online guy, but it no longer works. Get 9anime. It’s got everything and in HD.”

Another user said that the .com went down but the .io is still up:

[Question] Does anyone know what happened to www.watchcartoonsonline.io ? from Piracy

While the quality of watchcartoonsonline may not match up to the HD bit-rate of a paid service, most of the content is acceptable enough to enjoy.

Watchcartoonsonline has every episode of spongebob 😎

It’s obvious that some of the episodes are uploads of a recorded TV broadcast, which sometimes go back ten or more years.

Because it’s also a free website that sees a large amount of activity, then that means that the quality of streaming needs to be kept low to save on bandwidth.

One thing that’s useful about this streaming site is the breadth of content that’s available. Nearly every classic American cartoon, as well as a good amount of Japanese cartoons, are open for streaming in their entirety on watchcartoonsonline.

Um… I don't think so in us Netflix. So I'd just recommended watching it on a pirating site like watchcartoonsonline

The lack of invasive advertising is another reason that this site is preferable to the common free streaming resource. Because of all the heavy use and attention that it receives, there have been legal and technical issues.

There is a small percentage of content on watchcartoonsonline that is so old it probably isn’t going to be flagged for copyright infringement; however, the presence of much new content means that the authorities will attempt to shut down the entire website. Often times the owners of these websites will simply copy their entire structure and content to another domain whenever one site goes down.

Whether it’s due to Government regulations or simply an overloaded server, there’s virtually no way to stop some version of this website from rejuvenating on the internet.

One thing that does help keep the site out of serious trouble is the fact that it’s streaming only. Authorities are more likely to go after a website that makes content available for download in high quality, especially if it’s a paid service.

Even licensed streaming sites don’t make their content available for download, since this would ruin the demand for the show in the future and give people the option to watch offline.

If you do some research on watchcartoonsonline, then you’ll see that there are several forum posts complaining about the website being inaccessible.

ALSO READ:  What Is hiberfil.sys And Can You Delete It? [SOLVED]

When the domain changes for the sake of survival, the URL itself will change. This leads to myriad permutations in the ending of the domain, such as .io, .tv, .ru… etc.

When this change happens, the user will have to search to find the currently active version of the site. Any app that’s connected to watchcartoonsonline will also have to be reconfigured, otherwise it won’t connect.

App issues are the main problem reported in community posts about the website being down. It may seem like the website is gone for good, but a little research will surely reveal an active location.

Be warned that there are likely false websites that are made to look like watchcartoonsonline, but don’t function the same way.

They may attempt to install adware or simply barrage the user with popups. These inconveniences are part of the price to pay for free online streaming of cartoons and anime.

ALSO READ:  6 Fixes For The Your Connection Is Not Private Error [Solved]

If you’re still wondering whether watchcartoonsonline is down or not, then the answer is: maybe.

There’s no guarantee which domain is working, so the savvy user will carefully try out different website until they find the correct one.

Remember, even if the original owners of the website stopped participating in reviving the content, there would be many people that also have mirrors of the site set up to take their place. It’s not recommended to use a less-than-legal website as a streaming solution.

The risk of malware and the damage that it does to the entertainment industry isn’t worth the extra few dollars a month.

Nevertheless, many people are too destitute to afford a paid service or don’t appreciate any of the paid services available. This means that there will continue to be an interest in the upkeep of watchcartoonsonline, regardless of legal or moral context.