Howtogeek reports that WmiPrvSE.exe is a normal system process, a part of Microsoft Windows.

It provides the functionality of allowing other apps on your computer to make a query about system information and shouldn’t be removed. 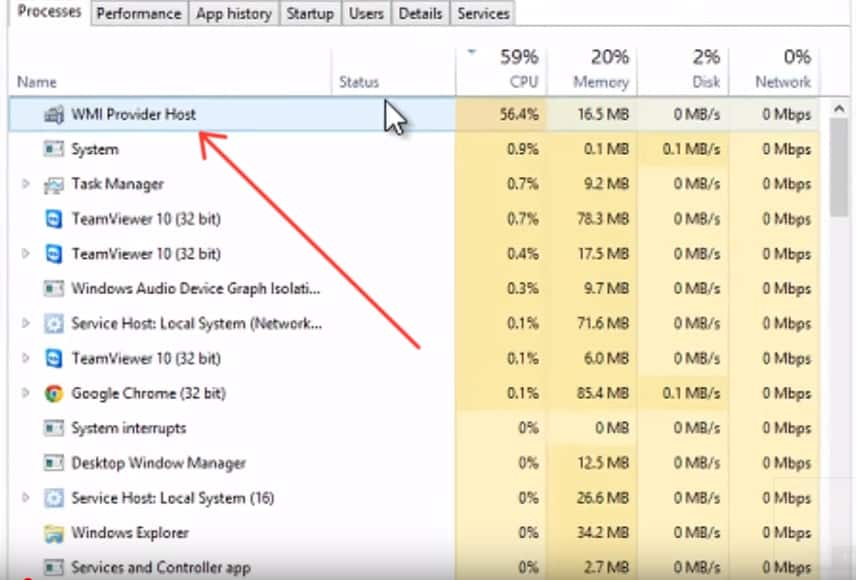 In some cases, however, it may give you all sorts of trouble, crashing your computer if it’s removed, or shooting your CPU usage to the moon if another process in your system is not behaving correctly.

According to Groovypost, it runs on the following operating systems:

It’s also a child of the svchost.exe process.

It could also be hijacked by some form of malware, which is most likely to be the case if your CPU usage is abnormally high (otherwise, it’s a legitimate system file that’s best left alone). Therefore, you should only attempt to remove it if you can determine it’s malware.

When determining whether the file is malicious, Neuber is a great resource.

Here’s what they’re saying about it:

– If you discover that the name of the process is wmiprvsw.exe instead of wmiprvse.exe (note the “w” at the end), you’re dealing with the Sasser worm, so beware!

– Supposedly, a variant of it causes win2k3 services fail to run.

– Sometimes, it comes up with sharing violations.

– In case you find more than one of these processes running on your computer, the one with the capital letters is the likely culprit, so you should get rid of it.

According to HowToGeek, you’re seeing high CPU usage from this process, it’s probable that another process on your computer is causing it.

If a process is regularly demanding a ton of amount of information from WMI providers, this will cause the WMI Provider Host process to begin using use a great deal of CPU. They say that that other process is actually the problem.

They recommend identifying the specific process by using your computer’s Event Viewer- they have step by step instructions on their page. Check that out first and follow their recommended process for resolving the CPU usage issue.

If for whatever reasons you weren’t able to resolve the problem this way, move to the next step.

This step is especially beneficial if you’d like to err on the side of caution and ensure that you’re not dealing with a virus.

Of course, this step is completely different for every single antivirus software, so we can’t really write a step by step guide. Your best bet is to go to Youtube and search for something along the lines of “How to scan my pc with [name of your antivirus]” or “[Name of your antivirus] scan guide”, etc.

But generally speaking, here’s the general plan to keep in mind:

We took a look at a bunch of different forums discussing this file process and the predominant themes involved it crashing, it taking up a lot of CPU resources on Windows 7 and Windows 10 computers.

File.net, a definitive authority in the examination of these file processes, says that it is a software component of Microsoft Windows Management Instrumentation by Microsoft Corporation. It generally sits in the “WBEM” subdirectory of “C:\Windows\System32”.

They also say that you shouldn’t be alarmed if you witness multiple instances of it running simultaneously- If that is occurring, they say that it is a post that is implementing a WMI “provider” routine.

HowToGeek provides a helpful screenshot- the utility’s own Description says that if this “service is stopped, most Windows-based software will not function properly”

Over at File.Net, one user said that it is an integral component of the Windows operating system employed or application installation and management.

He also says that the Norton Antivirus, as well as the McAfee Antivirus utilities, frequently detect it as a malicious virus, commonly compromising the operating system by blocking it.

Another user had a similar problem with his Kaspersky Internet Security utility – after an update in the summer of 2015, and began blocking it. This often seems to occur when his computer was running software that was automatically backing up files to an external USB drive.

Over on Reddit, one user said that the .exe process was clogging up the broad majority of his CPU.

He was looking for a solution to stop it from doing so. He clarified that he was using a Lenovo laptop running a Windows 7 operating system with two CPU cores. After Googling a bunch of potential fixes, nothing has worked and he decided to turn to the tech support community on Reddit for a viable answer.

He does also add that his friend gave him some software called ComboFix that eliminated the process, decreasing the CPU usage, but every time he restarted his computer the program returned. One of the recommendations came for my user who said that WmiPrvSE.exe “is a host process being called by something else”.

He recommended trying to figure out what is behind it – perhaps also attempting to clear the Prefetch cache. Another user suggested navigating to msconfig, disabling services one by one, rebooting after each, And then spot checking CPU usage.

When you notice that the CPU usage as normalized after having eliminated one of the services, you probably spotted the perpetrator.

Another Reddit user posted in the Assassin’s Creed subreddit Saying that he’s having a problem with this .exe spiking is CPU usage 15 to 20% while playing the game.

One person said that the best thing to do would be to run Malwarebytes iPhone he claims to have seen a lot of individuals recording malware it’s used in conjunction with WmiPrvSE.exe.